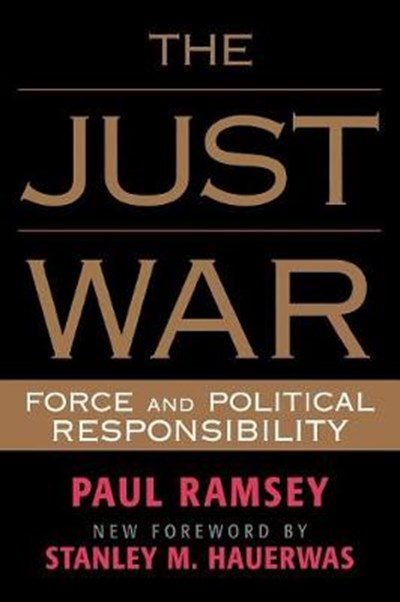 QTY
Add to Basket
Publisher: Rowman & Littlefield
ISBN: 9780742522329
Number of Pages: 592
Published: 14/07/2002
Width: 15.1 cm
Height: 22.7 cm
Description Author Information Reviews
Recent conflicts, such as the Persian Gulf War of the 1990s and the war against the Taliban in Afghanistan in 2001 show that the idea of what constitutes a 'just war' remains a crucial issue in politics and ethics today. With a new foreword by noted theologian and ethicist Stanley Hauerwas, this classic text on war and the ethics of modern statecraft written at the height of the Vietnam era in 1968 speaks to a new generation of readers. In defending just war against Christian pacifism and arguing against those who maintain that the end justifies the means in the conduct of a war, Ramsey joins a line of theological reasoning that traces its antecedents to Saint Augustine and Saint Thomas Aquinas. Ramsey argues that decisions regarding war must be governed by 'political prudence.' Whether a particular war should be fought, and at what level of violence, depends, Ramsey writes, on one's count of the moral costs and benefits. Characterized by a sophisticated yet back-to-basics approach, his analysis begins with the assumption that force is a fact in political life which must either be reckoned with or succumbed to. He then grapples with modern challenges to traditional moral principles of 'just conduct' in war, the 'morality of deterrence,' and a 'just war theory of statecraft.'

Paul Ramsey, one of the leading theologians of the 20th century, was professor of religion at Princeton University. Among his many writings are Basic Christian Ethics, Nine Modern Moralists, and War and the Christian Conscience: How Shall Modern War be Conducted Justly.

The enduring merit of Paul Ramsey's work is his ability to identify fundamental politcal-moral doctorine, clarify its theological sources and meanings, and apply it analytically and critically to the murkiest and most complicated problems of political-moral practice. The Just War is a masterful collection of theoretical ethical reflections on the actual doing of politics. -- Theodore R. Weber, Chandler School of Theology, Emory University Since its first appearance in 1968 Paul Ramsey's The Just War has established itself as a reference point in the Christian discussion of war and deterrence in the English-speaking world. Ramsey thinks with searching intensity, and demands a great deal of his readers in thoughtfulness and concentration. He rewards them with an experience of intellectual penetration which is all too rare in the discussion of contemporary problems. -- Oliver O'Donovan,, Regius Professor of Moral and Pastoral Theology, University of Oxford The work is dense and wide-ranging. With this most welcome edition, the valuable lessons of Ramsey's The Just War should be extended to a new generation of students and scholars. Religious Studies Review Anyone seriously concerned with the moral questions of modern warfare must confront the careful thinking of Paul Ramsey. One may not always agree but one never fails to learn-even in moments of disagreement. -- Rev. J. Bryan Hehir,, Harvard University Divinity School