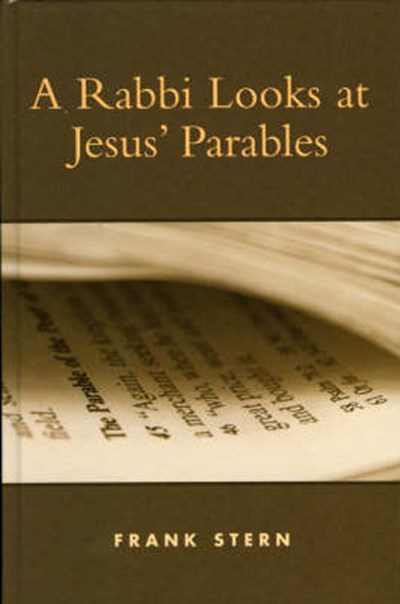 QTY
Add to Basket
Publisher: Rowman & Littlefield
ISBN: 9780742542709
Number of Pages: 240
Published: 19/03/2006
Width: 18.1 cm
Height: 23.5 cm
Description Author Information Reviews
Intended to appeal to both Christians and Jews,A Rabbi Looks at Jesus' Parables is an introduction to the teachings of Jesus, and compares the similarities and differences in Jesus' thinking to other Jewish sources from first-century Palestine. Each chapter uncovers hidden messages within each of Jesus' parables, and discusses each parable within its first-century religious and historical context. The book attempts to build bridges of understanding between Christians and Jews by exploring the notion that we share a common history.

Frank Stern is an ordained rabbi and the Associate Director of the Center for the Study of Religion in American Life at California State University-Fullerton. He also lectures widely on Judaism, Comparative Religion, and Jewish-Christian Relations.

Finally, a scholar and clergyman willing to view Jesus in his real home. By analyzing Jesus' parables in the light of Jewish sources, Rabbi Stern is able to reveal layers of meaning within meaning, bringing deep wisdom and healing vision to the surface. This is precisely the kind of responsible scholarship that honors cultural and religious convictions and differences, and which can move then enterprise of faith forward. Anyone who seeks to understand Jesus' message, anyone who seeks to understand the Jewish roots of Christian faith, anyone seeking a Jewish perspective on the stories at Christianity's core, will do well to begin right here. -- Rabbi Bradley Shavit Artson, Vice President, University of Judaism and Dean, Ziegler School of Rabbinic Studies Frank Stern has written a scholarly and serviceable book illustrating the important parallels in the rabbinic literature and the Gospels. The Mashal or parable literature, serves as a brilliant didactic method of teaching. Stern has captured the dynamic of this method and has shown derivative techniques in the methodology of the parable didactic. -- Rabbi Alfred Gottschalk, Chancellor Emeritus and Distinguished Professor Emeritus of Bible and Jewish Religious Thought Hebrew Union College-Jewish Inst More than any recent author I know, Rabbi Stern has enabled the parables to be illumined by the Hebrew Scriptures, to be agents for the expansion of the Christian story and to create new insights into our lives today. That is no small accomplishment. -- John Shelby Spong, Retired New Jersey Episcopal Bishop, Author of The Sins of Scriptures The volume does provide a worthwhile resource as to the Jewish background of the parables and at times a Jewish hearing of the parables. -- Michael Moss Stone Campbell Journal Stern (California State Univ., Fullerton) offers a worthy introduction to the study of Christianity from its beginnings as a Jewish-Christian sect. A rabbinic scholar, he illustrates the Jewish precedents underlying the parables by references to and quotations from the Hebrew prophets (e.g., Micah, Isaiah), the Hebrew Bible (e.g., Deuteronomy and Leviticus), and renowned rabbis such as Hillel and Eliezer. The author presents a parable, suggests the secret knowledge the parable conveys to believers, discusses how Jesus built on Jewish images, and considers how this plays out in each of the synoptic gospels. In somewhat more detail he looks at the primary figure (e.g., the Pharisee), the primary concept (e.g., the imminence of God's Kingdom), and the primary image (e.g., the fig tree). In each case he illustrates their role in the Jewish tradition. Throughout, Stern indicates the problems in the later Greek translation of the parables, which had been spoken by Jesus in Aramaic with Hebrew references at least a generation earlier. Ultimately, the outstanding issue that separated Jesus from the earlier prophets and his Jewish contemporaries was his teaching that access to God, and thereby salvation, was possible only through Jesus himself. Summing Up: Recommended. Lower-level undergraduates and general readers. -- M. F. Nefsky, emerita, University of Lethbridge CHOICE Stern's book is an excellent primer on the Jewishness of the parables... This small volume is a helpful introdcution to topics that may confuse or confound non-Jews. Its simple style would lend itself for use in youth studies centered on comparative religious explorations. Journal of Ecumenical Studies