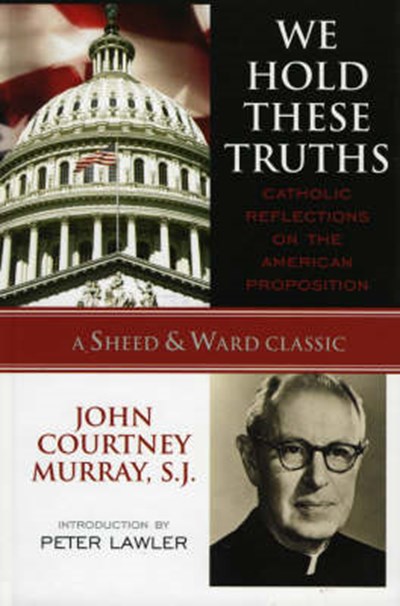 QTY
Add to Basket
Publisher: Rowman & Littlefield
ISBN: 9780742549005
Number of Pages: 320
Published: 20/09/2005
Width: 17 cm
Height: 23.5 cm
Description Author Information Reviews
The 1960 publication of We Hold These Truths marked a significant event in the history of modern American thought. Since that time, Sheed & Ward has kept the book in print and has published several studies of John Courtney Murray's life and work. We are proud to present a new edition of this classic text, which features a comprehensive introduction by Peter Lawler that places Murray in the context of Catholic and American history and thought while revealing his relevance today. From the new Introduction by Peter Lawler: The Jesuit John Courtney Murray (1904-67) was, in his time, probably the best known and most widely respected American Catholic writer on the relationship between Catholic philosophy and theology and his country's political life. The highpoint of his influence was the publication of We Hold These Truths in the same year as an election of our country's first Catholic president. Those two events were celebrated by a Time cover story (December 12, 1960) on Murray's work and influence. The story's author, Protestant Douglas Auchincloss, reported that it was 'The most relentlessly intellectual cover story I've done.' His amazingly wide ranging and dense-if not altogether accurate-account of Murray's thought was crowned with a smart and pointed conclusion: 'If anyone can help U.S. Catholics and their non-Catholic countrymen toward the disagreement that precedes understanding-John Courtney Murray can.' . . . Murray's work, of course, is treated with great respect and has had considerable influence, but now it's time to begin to think of him as one of America's very few genuine political philosophers. His disarmingly lucid and accessible prose has caused his book to be widely cited and celebrated, but it still is not well understood. It is both praised and blamed for reconciling Catholic faith with the fundamental premises of American political life. It is praised by liberals for paving the way for Vatican II's embrace of the American idea of religious liberty, and it is blamed by conservatives and traditionalists for obscuring the real conflicts between Catholicism and 'Americanism.' Both the liberal praise and the conservative blame are somewhat misguided. The last thing Murray wanted to do is bring the church up-to-date with the latest currents in American thought. He wanted to show how distinctively Catholic thought could illuminate the authentic American idea of liberty. . . . We Hold These Truths at least offers the hope that Catholic natural-law thinking can bring together the religious devotion and moral concerns of the evangelicals with the devotion to reason and concern for scientific truth of the secular humanists. It offers the hope of getting Americans really arguing again, of holding again the truth that they are capable of engaging in the dialogue about the human good that is the foundation of any civil and civilized moral and political life. Peter Augustine Lawler is professor of political science at Berry College in Georgia.

Father John Courtney Murray was one of America's foremost theologians. Born in New York City in 1904, he held degrees from Boston College, Woodstock College, and the Gregorian University in Rome, where he received his doctorate in theology. He was professor of theology at Woodstock College and editor of Theological Studies for over twenty-five years.