Turning Ballparks into Pulpits and Players into Preachers 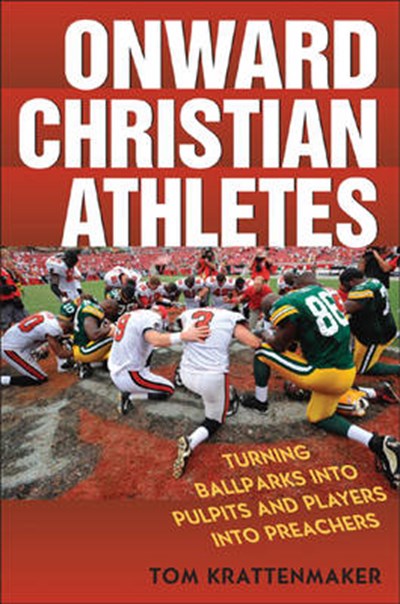 Turning Ballparks into Pulpits and Players into Preachers

QTY
Add to Basket
Publisher: Rowman & Littlefield
ISBN: 9780742562479
Number of Pages: 228
Published: 16/12/2009
Width: 16.2 cm
Height: 23.8 cm
Description Author Information Reviews
Players pointing triumphantly to the heavens. Lavishly paid pro athletes proclaiming their Christianity in public every chance they get. Faith Nights at professional sports events. The hand of God proclaimed in every win streak. Pro sports teams are supposed to provide a civic rallying ground where fans of widely varying background and faiths come together. In Onward Christian Athletes, religion expert and commentator Tom Krattenmaker takes us behind the scenes of the conservative Christian movement to evangelize in the club house and enlist pro athletes to promote a specific brand of Christianity outside the mainstream of a religiously and politically diverse America.

Tom Krattenmaker is a member of USA Today's Board of Contributors and a frequent contributor to its weekly On Religion series. His work has also appeared in the Philadelphia Inquirer, Los Angeles Times, and Salon. He resides in Portland, Oregon.

With the skill of a journalist and the diligence of a researcher, Krattenmaker makes a persuasive and compelling case that conservative Christian groups have a virtual religious monopoly in professional sports-and that there signs of change. Remarkably fair and readable, insightful and important for anybody interested in either Christianity or sports. -- Marcus Borg, New York Times best selling author and author of The Heart of Christianity I have been waiting for someone to write this book for years, and Krattenmaker does not disappoint, Onward Christian Athletes fills the gap in our understanding of the way religion and religious organization shapes the players and the teams we follow. Anyone serious about understanding 21st century sport needs to read this book. -- Dave Zirin, author of A People's History of Sports in the United States Onward Christian Athletes is compelling, judicious, prophetic-and deeply disturbing. This is a superb book. -- Randall Balmer, professor of religious history at Barnard College, Columbia University Tom Krattenmaker-in my opinion-is one of the most informed and relevant writers on the Evangelical movement today. His critique is fair and his knowledge is impressive. -- Kevin Palau, executive vice president, Luis Palau Association In this fascinating book, Krattenmaker maintains that 'spontaneous' displays of faith on or off the playing field (including team prayer huddles) are not so spontaneous at all, that they're part of a concerted effort on the part of a 'network of evangelical chaplains and sports ministry organizations' to join Christianity-in particular the Christian Right-with pro sports. The author makes a persuasive argument that athletes are encouraged, sometimes even cajoled or pressured, to make public statements of faith, and that being a pro athlete can mean committing to becoming a spokesman on behalf of Christianity (and, by extension, a supporter of the Christian Right's political agenda). Yet this isn't an attack on religion in sports; the book argues its case but does so in a largely balanced manner. Expect both book and author to attract criticism and controversy from many on the Right; Krattenmaker won't mind; he's all in favor of a spirited debate. Booklist Tom Krattenmaker leveled a comprehensive critique of the evangelical Christian message that, as he laments, permeates so much of the sporting world at both the college and professional levels. Krattenmaker correctly traces evangelical influence in sports to the 'muscular Christianity' movement so popular in America between the Civil War and World War II. He expresses appreciation for the moral influence of evangelical Christians and Christian conviction within the lives of athletes. Nevertheless, he is clearly alarmed by evangelical displays of the Gospel. -- Albert Mohler Crosswalk.Com Blogs Tom Krattenmaker's new Onward Christian Athletes is a brilliant and much-needed investigative analysis for those viewing post-game, on-field prayer meetings as foolish displays of exclusionary, only-through-Christ silliness... This is a book that many Americans, and many sportsfans, have been waiting for and Krattenmaker has performed a public service in his rigorous and often funny investigation of something everyone sees in sports and then lets go by like a Miller Lite commercial... Thank you Tom Krattenmaker! Uppity Wisconsin This is a remarkably interesting read. Bill's 'Faith Matters' Weblog Krattenmaker has a keen awareness and knowledge of conservative evangelical Christianity, which promotes a particular brand of faith in all the major professional sports. This is a creative treatment of a serious problem in sport and society more broadly. Highly recommended. CHOICE This work should appeal to both academics and the general public, no matter what religious persuasion, who have an interest in and concern about the place of religion in sports today. Library Journal An incisive, example-filled look at the often overlooked, seldom-examined ways in which sports and faith converge. Between the Lines