Struggle for the Spirit

Religious Transformation and Popular Culture in Brazil and Latin America 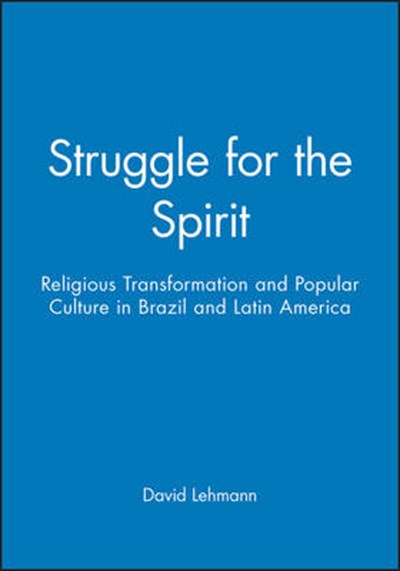 Struggle for the Spirit

Religious Transformation and Popular Culture in Brazil and Latin America

QTY
Add to Basket
Publisher: Polity Press
ISBN: 9780745617848
Number of Pages: 264
Published: 22/09/1996
Width: 16.5 cm
Height: 23.8 cm
Description Author Information Reviews
For 500 years Catholicism has been the dominant religious force throughout Latin America. Its hegemony was based on a complex relationship with popular culture; the colorful and the macabre, the syncretic and the purist, the indigenous and the cosmopolitan, the popular and the erudite have combined to form a uniquely creative and reflexive cultural complex. But in the second half of the twentieth century, just as the Church sought to reform itself by proclaiming its "preferential option for the poor", some of the most charismatic forms of Protestantism, carried along by an open and aggressive hostility to the traditions of popular culture, began to establish themselves at the heart of the popular sectors themselves -- in the large urban slums, among Indian groups and, increasingly, throughout other strata of Latin American societies. Today around a fifth of the population of countries like Brazil and Chile Protestant, mostly Pentecostal. Is this a new Reformation? A cultural revolution? Or merely another confirmation of the illusion of liberation? Drawing on detailed research in Brazil and extensive knowledge of Latin America as a whole, Lehmann explores the predicament of the Catholic Church in the face of the apparently irresistible rise of Pentecostalism, examines the structure and practices of the religious organizations and assesses the broader political implications of these developments. This well informed and carefully researched study sheds new light on one of the most remarkable cultural transformations of our time.

David Lehmann is Director of the Centre of Latin American Studies, Cambridge.

"Struggle for the Spirit comes to grips with two antagonistic contemporary modes of thought and action, Christian fundamentalism and basismo, through the broad sweep of history, as contemporary worldwide movements, and within the temples and chapels of the city of Salvador, Brazil. This very well written and good--humoured book should be read not only by those interested in religion, since as all good sociology it suggests relationships and connections with society as a whole. It will provoke heated debate both among Latin Americanists and among those concerned with understanding fundamentalism and basismo as global phenomena." Peter Fry, Federal University of Rio de Janeiro "Lehmanna s accounts of basismo and Pentecostalism are instructive and based on ... well chosen subjects." European Journal of Latin American and Caribbean Studies "Religion and its multiple intersections with society and politics are being belatedly recognized as enormously important in the contemporary world. David Lehmann was doing distinguished work on this matter well before this recognition. Now he offers us, in this volume, another fascinating study that distillates his long immersion on this topic as well as his extremely close knowledge of Brazil and other Latin American countries." Guillermo Oa Donnell, University of Notre Dame "David Lehmanna s Struggle for the Spirit is a rich and insightful addition to the literature both on radical modern Catholicism and on radical primitive Pentecostalism in Latin America." David Martin, Times Literary Supplement "Lehmanna s book is a subtle and welcome examination of the extraordinary recent growth of Pentecostalism in Brazil and Latin America. The book is based on field research ... and draws, as well, on an array of rich secondary sources." Choice "The style is flowing and reads like a travel story; a well--informed account, always on the look--out and guided by interrogations framed in theoretically pertinent questions. He opens up a large field of research as yet unexplored and fascinating." Latin American Studies "Lucidly written, based on an impressive breadth of reading, long experience of Latin America and recent, original fieldwork in Brazil ... Latin Americanists will find much to stimulate them in this book ... An enjoyable and easily digested book [which] shall have a significant impact within and beyond Latin American studies." Bulletin of Latin American Research "The book is a good introduction to the study of contemporary religious change in Brazil." Journal of Contemporary Religion