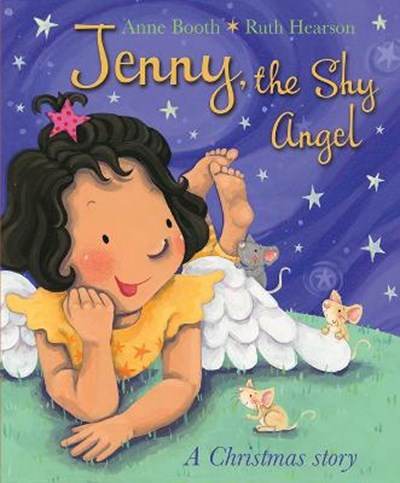 QTY
Add to Basket
Publisher: Lion Hudson Ltd
ISBN: 9780745977379
Published: 24/08/2018
Description Author Information Reviews
Jenny is a shy angel who doesn't like lots of noise and rushing about. When the other angels ask her to go with them to see the newborn baby king, she decides to stay behind. In the quiet night she learns about love and nature, and that being shy doesn't matter because silent moments are special too.

Anne Booth studied English at The University of York, but after some years working in a bookshop and teaching in Italy, she studied Pastoral Theology for a year before working as an administrative assistant in a Christian Charity. Whilst working she completed a part-time MA in Children's Literature, which she still loves! After getting married and raising four children, she took art classes as a hobby. Later, she worked part-time running singing and art classes in an old people's home, and tutoring. She then, she studied another part-time MA in the evenings - this time in Creative Writing! She gave up teaching to become a full-time carer for her elderly parents and during this time, she began to write books for children, got an agent and then got published. Her first book, Girl with a White Dog, for 9-12 year olds was published in 2014 and since then, she has published two more books for 9-12 year olds, four picture books, four books for 5-8 year olds and one book for 7-9 year olds. In her own words, "Jenny The Shy Angel" will be my fifth picture book and my 13th children's book, so I feel very blessed! I absolutely love Ruth Hearson's illustrations for this book!" Ruth often describes her job as "drawing baby toes." Ruth graduated from Birmingham City University in 1996 with a First-Class degree in Visual Communication: Illustration and had such a lovely time she stayed on to do a Master's degree. In 2018, Ruth was nominated for the Kate Greenaway Medal for Illustration. Actively involved with her church, Ruth helps to present a monthly service called "Everybody Sunday," which creatively presents a biblical theme to an all-age congregation. You'll find Ruth drawing and drinking tea at home in North Staffordshire, where she lives with her husband, two noisy teenage children and a sleepy cat called Orlando.