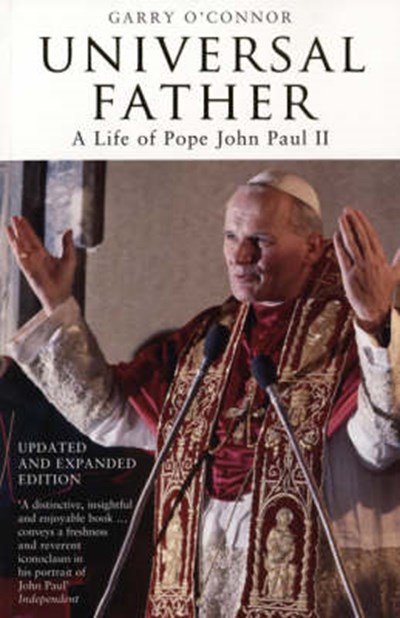 eBook FAQ
Add to Basket
Publisher: Bloomsbury Publishing PLC
ISBN: 9780747582410
Published: 06/03/2006
Description Author Information Reviews
Pope John Paul II is now universally considered to have been one of the great leaders of the twentieth century and possibly the most politically influential pope since St Peter. His achievements are well documented, yet he once said, 'I can only be understood from the inside.' In this vivid and accessible living portrait, O'Connor investigates the inner man, including Karol Wojtyla's life before he became Pope and his friendships with men and women, subtly analysing the Pope's own poems, plays and philosophical works for clues as to what made him tick. It also dramatically follows his life, from his birth in Poland in 1920, through the losses that shaped his childhood, the assassination attempt in 1981, and his great public confrontations on the world stage, right up until his death in April 2005.

Garry O'Connor is the author of highly praised biographies of Ralph Richardson, Peggy Ashcroft, Paul Scofield, Alec Guinness, Sean O'Casey and William Shakespeare. He lives near Banbury with his wife and six children.

'This is the last biography of John Paul II to have been finished while he was still alive. It is also the best. Universal Father is the only life of the late Pope that is an artistic achievement in its own right. None of Garry O'Connor's predecessors has matched his exposition of the literary, philosophical and dramatic sources of John Paul's pontificate, or his nimble untangling of the strands of theological argument' Daily Telegraph 'A fine, enduring biography ... O'Connor's triumph is to make the search for the soul of a papacy an enjoyable, edifying and occasionally emotional journey' Glasgow Herald 'Garry O'Connor, whose previous books include superb biographies of Laurence Olivier, Alec Guinness, Ralph Richardson and Paul Scofield, is very much at home in this warm portrait of the greatest actor-manager of them all ... O'Connor has painted a loving portrait' Mail on Sunday 'A distinctive, insightful and enjoyable book ... conveys a freshness and reverent iconoclasm in his portrait of John Paul' Independent