Preference for the Poor 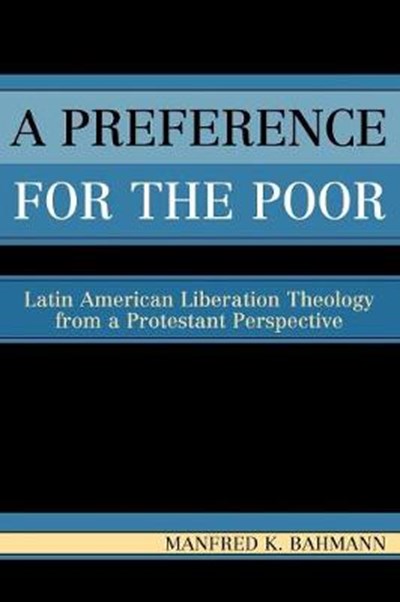 Preference for the Poor

QTY
Add to Basket
Publisher: University Press of America
ISBN: 9780761830535
Number of Pages: 112
Published: 13/03/2005
Width: 15.3 cm
Height: 22.9 cm
Description Author Information Reviews
A Preference for the Poor tells the story of Latin American Liberation Theology in a succinct and scholarly, yet readable way. Author Manfred Bahmann highlights the emphases of major Latin American liberation theologians; the rise of military dictatorships; the pope's course correction in his 1975 encyclica "Evangelii Nuntiandi," fleshed out at the 1979 Latin American Episcopal Council (CELAM) conference in Puebla; and the movement's decline with the collapse of world Marxism. Following a description of the phenomenal growth of Pentecostalism on the traditionally Roman Catholic continent, Dr. Bahmann posits a Protestant view of a new Liberation Theology built on a spiritual foundation for Christian believers within a world of global capitalism.

Manfred K. Bahmann holds a Ph.D. in Church History/Reformation Studies from the Hartford Seminary Foundation. He was Professor for Church History at the Protestant Seminary in Buenos Aires, Argentina and an observer at the Medellin Conference where Liberation Theology was conceived.