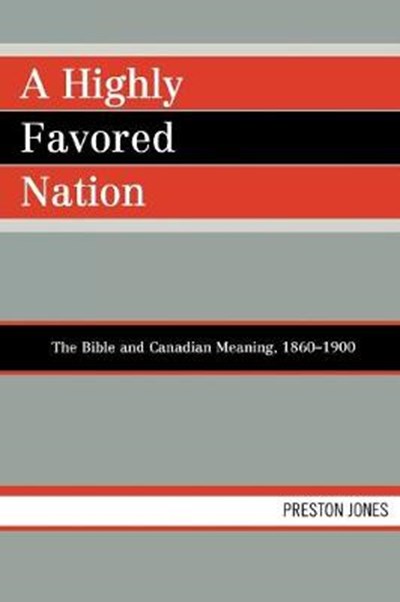 QTY
Add to Basket
Publisher: University Press of America
ISBN: 9780761839033
Number of Pages: 132
Published: 22/12/2007
Width: 15.4 cm
Height: 23.1 cm
Description Author Information Reviews
A Highly Favored Nation focuses on the ways late nineteenth-century Canadians employed biblical texts to describe Canadian identity and the meanings of their nation. Recognizing that many "ordinary" Canadians who went about their day-to-day lives probably did not have much interest in existential questions, this book focuses on the words of Canada's nationalists, preachers, promoters, and enthusiasts. A Highly Favored Nation challenges the common nineteenth-century Protestant claim that Quebec was a Bible-free zone and it suggests that, by the end of the nineteenth century, Canadians' public use of Scripture had diminished the Bible's cultural authority.

Preston Jones has been a U.S.-Canada Fulbright Scholar and a fellow of the Pew Program in Religion and American History. He has contributed over 220 articles to numerous publications for general and academic audiences, including the San Francisco Chronicle, the Dallas Morning News, the National Post (Toronto), the Journal of Church and State, and the American Review of Canadian Studies. Professor Jones has taught Advanced Placement courses at the secondary level and history at Sonoma State University (California), the University of Dallas, and the University of Ottawa (Canada), where he completed his Ph.D. in 1999. Currently he teaches at John Brown University in Arkansas. This is his fourth book.

Jones showsthat Canadian experience illustrates just as much as American experience the beatitude arising from treating God-given 'holy things' as gifts from a merciful Sovereign, but also the enervating peril when these 'holy things' are mishandled as objects of partisan advantage. Books and Culture, July 2008