Form of God, Form of a Servant

An examination of the Greek noun morphe in Philippians 2:6-7 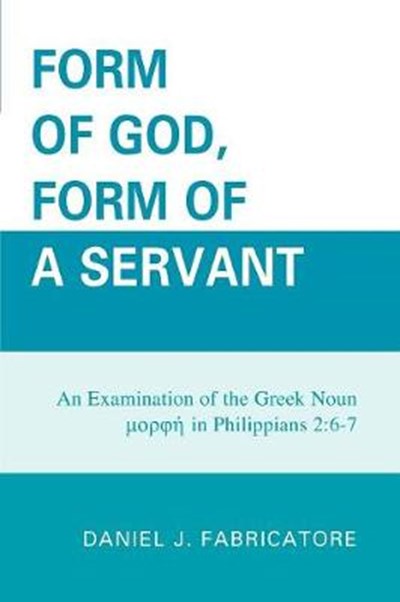 Form of God, Form of a Servant

An examination of the Greek noun morphe in Philippians 2:6-7

QTY
Add to Basket
Publisher: University Press of America
ISBN: 9780761848288
Number of Pages: 250
Published: 28/02/2010
Width: 15.5 cm
Height: 23.2 cm
Description Author Information Reviews
Form of God, Form of a Servant examines the Greek noun morphe and seeks to discover Paul's meaning when he portrayed Christ as existing in the 'form of God' as well as taking on the 'form of a servant' in Philippians 2:6-7. This book adopts a synchronic approach to lexical semantics, and examines a cross section of Greek writers who use morphe from the classical period up through the first century A.D. The book also looks at how morphe has been interpreted throughout the church age, before exegetically examining the passage and interpreting the term in its context.

Daniel J. Fabricatore is pastor of Grace Bible Church in Frederick, MD and has pastored churches in Pennsylvania and Maryland for twenty years. He earned a Th.M. at Dallas Theological Seminary and a Ph.D. from Baptist Bible Seminary in Pennsylvania.

Form of God, Form of a Servant, has proven to be quite valuable in my own study of Philippians 2:6-11. Lexicography is, of course, but a single instrument in our exegetical toolbox, but it an important one, nonetheless. Fabricatore is the first scholar, to my knowledge, to have employed the resources of UC Irvine's Thesaurus Linguae Graecae in the study of the various nuances of in ancient literature. The implications of Fabricatore's findings for the meaning of the term in its Christological context in Philippians are significant. Fabricatore's study will be particularly challenging to those of us who claim to find in 'form of God' (Phil 2:6) an ontological component relating to the divinity of Christ. I recommend this work for anyone wrestling with Paul's Christological masterpiece in Philippians 2. -- Joe Hellerman, Ph.D., professor of New Testament language and literature, Talbot School of Theology Discussions of the kenosis have long revolved around the attributes: did the Son give up any of his attributes in the incarnation, the use of them, or their independent exercise? The warrant for any reference to the attributes in Philippians 2 has seldom been addressed. Since Lightfoot it has sometimes been justified by appeal to the meaning of morphe. What has not previously been done, however, is to examine the use of that word across the sweep of ancient Greek usage. This Dr. Fabricatore has done in Form of God, Form of a Servant, providing a wealth of synchronically-sensitive, analyzed data that contributes significantly to the theological discussion of the kenosis. -- Rodney J. Decker, Th.D., professor of New Testament, Baptist Bible Seminary, Clarks Summit, PA