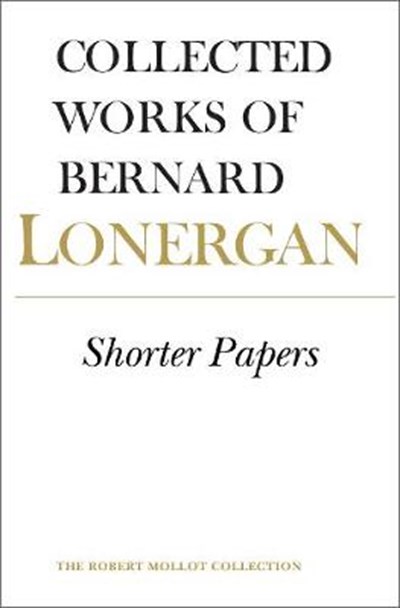 QTY
Add to Basket
Publisher: University of Toronto Press
ISBN: 9780802095176
Number of Pages: 368
Published: 29/12/2007
Width: 15.7 cm
Height: 23.5 cm
Description Author Information Reviews
As a prolific scholar and theologian, Bernard Lonergan authored a significant amount of material aside from the works with which he is commonly associated. Shorter Papers is a collection of lesser-known items written by Lonergan over the course of his career. Together, they offer privileged access to the author's thought and work, as well as a glimpse at some of his most personal qualities. The items in this volume extend from some of the earliest writings - the Blandyke Papers, for instance, which predates any of the materials represented in the Collected Works - to pieces written near the end of Lonergan's life. Organized chronologically, they give an impression of his development as a writer, his ever-strengthening religious commitment, and his role as teacher. As a sampling of pieces from the late 1920s to the early 1980s, Shorter Papers testifies to the cumulative impact of Lonergan's work, as well as to the amazing continuity that he maintained throughout his career as an author and intellectual.

Bernard J.F. Lonergan (1904-1984), a professor of theology, taught at Regis College, Harvard University, and Boston College. An established author known for his Insight and Method in Theology, Lonergan received numerous honorary doctorates, was a Companion of the Order of Canada in 1971 and was named as an original members of the International Theological Commission by Pope Paul VI. Robert C. Croken is the former director of the Lonergan Research Institute at Regis College. Robert M. Doran is the Emmett Doerr Chair in Systematic Theology and a professor in the Department of Theology at Marquette University. He is the general editor of the Collected Works of Bernard Lonergan. H. Daniel Monsour is an associate editor of the Collected Works of Bernard Lonergan and holds a PhD in theology from the University of Toronto.