End of a Crusade

The Student Volunteer Movement for Foreign Missions and the Great War 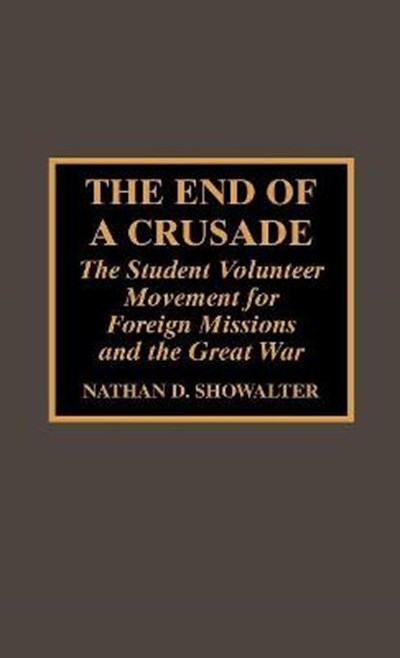 End of a Crusade

The Student Volunteer Movement for Foreign Missions and the Great War

QTY
Add to Basket
Publisher: Scarecrow Press
ISBN: 9780810833401
Number of Pages: 224
Published: 18/12/1997
Width: 14.6 cm
Height: 22.1 cm
Description Author Information Reviews
At the end of the nineteenth century, a small group of American students launched a student mission movement that eventually recruited and helped to deploy more than twenty thousand missionaries over a period of about half a century. The story of the Student Volunteer Movement (SVM) has been often recounted, but never in relationship to the colossal tragedies of the Great War. This is surprising, since the war challenged in fundamental ways both the premises and the practices of the Protestant missionary crusade. A Christian civilization's claim to moral superiority was savaged by the European war. International cooperation among Protestant denominations and missionary organizations received a devastating setback. The war crushed the cheerful hopes of the Social Gospel, that liberal alliance between the kingdom of God and American culture. The identification of the missionary with national causes in wartime led to a serious loss of credibility for missions in the decade after the war. This confusion of crusades, among a generation of disillusioned crusaders, dealt the Student Volunteer Movement a blow from which it never recovered. The End of the Crusade looks at the development and eventual decline of the SVM, chronicling the disillusionment felt by student volunteers as they were compelled to leave the SVM and enlist in a different crusade, the Great War.

Nathan D. Showalter (Th.D., Harvard University) is Senior Pastor at Taipei International Church in Taipei, Taiwan, and has worked with churches and Christian organizations in Kenya, Germany, Hong Kong, Indonesia and the United States. A specialist in cross-cultural communication, he worked for six years with World Vision International.

...does a convincing job of showing the effects of the war...his well-researched book is worth reading. Emq Showalter writes with effective...clarity and with impressive documentation. Missiology: An International Review, Vol. Xxvii, No. 1, !/99 ...a detailed analysis of how the largest student missions organization worked during the First World War...and sowed the seeds for its later decline. Missiology: An International Review, Vol. Xxvi, No.3, July 1