Historical Dictionary of The Salvation Army 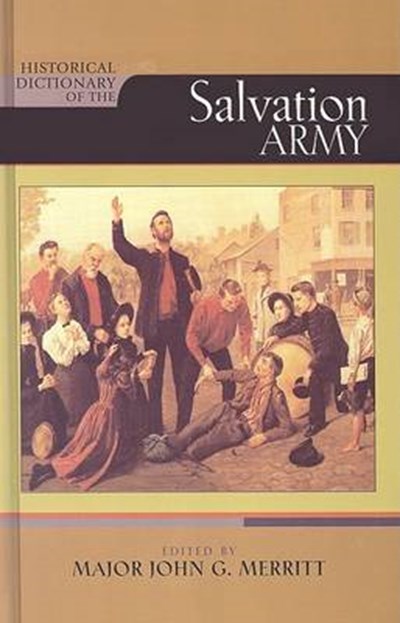 Historical Dictionary of The Salvation Army

Publisher: Scarecrow Press
ISBN: 9780810853447
Number of Pages: 848
Published: 05/09/2006
Width: 15.2 cm
Height: 22.5 cm
Description Author Information Reviews
With more than 1,500,000 members and adherents in 109 countries, there is hardly anyone nowadays who is not familiar with the Salvation Army. And while many have been directly affected by its activities in health, relief, and community service, it is rare that one knows much about this unique Christian movement, which was founded in London in 1865 by William Booth-its first "General"-and has continued growing ever since. Whether merely curious, impressed by its work, or among its members, the Historical Dictionary of the Salvation Army provides a wealth of information for those who want to know more. This excellent source on all varieties of aspects related to the Salvation Army-its history, organization, structure, beliefs, and activities around the world-sums them all up in a broad introduction. It then presents the information in greater detail in hundreds of cross-referenced dictionary entries, while nearly a century-and-a-half of history is traced in the chronology, and further reading is indicated by two extensive bibliographies. This volume, written by more than 150 contributors-all specialists on different aspects and countries-under the direction of Major John G. Merritt, concludes with nine appendixes, including the first-ever published list of the more than 425 men and women who have attained the rank of Commissioner.

Major John G. Merritt became a Salvationist in 1966 and was commissioned a Salvation Army officer in 1968. For the next 33 years, he served in pastoral, inner city, editorial, educational, and historical agency appointments in the USA and Chile, retiring with the rank of major in 2001 after 11 years as director of The Salvation Army's Southern Historical Center, Atlanta, Georgia.

Major Merritt's admirable dictionary fills a long-felt need for a comprehensive, scholarly reference source of information about The Salvation Army. Here is an essential tool for anyone interested in the growth and work of this Movement. I strongly recommend it. -- General John A. Larsson, International Leader of The Salvation Army, London A must for all who would study the movement. -- Russell E. Richey, Dean and Professor of Church History Candler School Of Theology, Emory University This volume is an important reference work for those interested in the history, organization, structure, beliefs, and activities of the Salvation Army... -- . International Bulletin Of Missionary Research, April 2008 ...more than 450 individuals contributed to this [book] covering the 'history, organization, structure, beliefs, and activities' of the Salvation Army. Booklist, 1/1/2007 This is an impressive work of scholarship that is highly recommended for academic, seminary, and large public libraries. American Reference Books Annual, vol. 38 (2007) An important new source... Revitalization, Spring 2007 (vol 14, no 1) Over one and a half million people are members and they have adherents in 109 countries. Both men and women preach, teach, heal and administrate. One Corps Sergeant-Major was a member of the Swedish Parliament. Formal affiliation as a soldier includes a swearing-in ceremony, and official uniform standards are adjusted according to climate. From abstinence to the story of founder William Booth to holiness meetings to the work in the Zimbabwe territory, these hundreds of entries are augmented by such helpful features as a chronology, an introduction, statements of doctrine, and explanations of ranks and designations. Also included are a bibliographic essay and very comprehensive bibliography by and about the Salvation Army and a photo collection. The result is very useful in understanding not only the Salvation Army but also other faith-based social service organizations and the religious side of progressivism and social action movements. Reference and Research Book News, November 2006