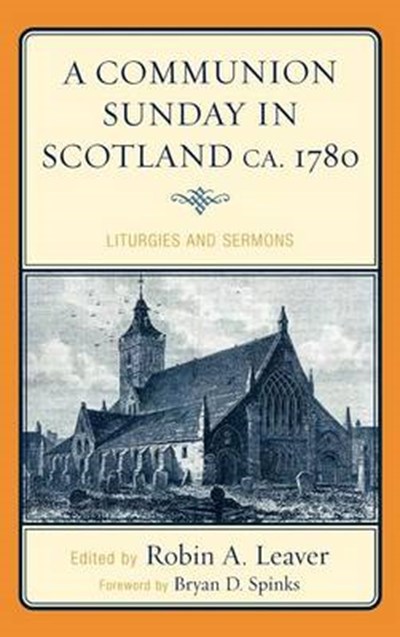 eBook FAQ
Add to Basket
Publisher: Scarecrow Press
ISBN: 9780810869806
Number of Pages: 180
Published: 02/01/2010
Width: 16.2 cm
Height: 23.9 cm
Description Author Information Reviews
Sources for 17th, 18th, and early 19th-century Eucharistic practices in the Church of Scotland are scarce, in part because each minister was free to draw up the form and content of the services he conducted. In addition, many 19th and 20th century liturgical scholars chose to dismiss this form of public worship, instead focusing on the earlier tradition of the Book of Common Order. A Communion Sunday in Scotland ca. 1780: Liturgies and Sermons addresses the dearth of these liturgical studies by presenting a modern edition of a late 18th-century published account of Communion Sunday in the Church of Scotland. Robin A. Leaver edits and annotates several sermons, prayers, and congregational songs by the Reverend John Logan (1747?-1788), together with relevant background information and comparative documents. Citing Logan's sermons, liturgies, and psalms as a representative model, Leaver demonstrates that there was a developed liturgical structure and form in the Church of Scotland, in which preaching, psalmody, and prayer expressed Calvinist/Presbyterian theology within established patterns of worship. Leaver also provides an overview of Scottish Eucharistic practices from the 16th to the 19th centuries. Appendixes offering a list of Scottish Psalm Tunes and a translation of the Palatinate Liturgy (1563) are followed by a comprehensive bibliography, making this a valuable reference.

Robin A. Leaver has written on topics as varied as Martin Luther, 16th-century psalmody, hymnody, and the sacred music of Johann Sebastian Bach. He is the author of Luther's Liturgical Music: Principles and Implications (2007).

A Communion Sunday in Scotland ca.1780: Liturgies and Sermons contribute significantly to our understanding of the interactions of music, liturgy, and theology in eighteenth-century England and Scotland. Interdisciplinary in nature, weaving together strands of theology, liturgy, hymnody, psalmody, and art music to enlarge our thinking about these fields and their interrelationships. A Communion Sunday in Scotland is a valuable resource for our understanding of liturgy, theology, church polity, and congregational song in the eighteenth-century Scottish Church. Leaver has done readers a significant service in making Logan's liturgies and sermons easily accessible, while situating them in relation to other eighteenth-century liturgical sources Society for 18th Century Music