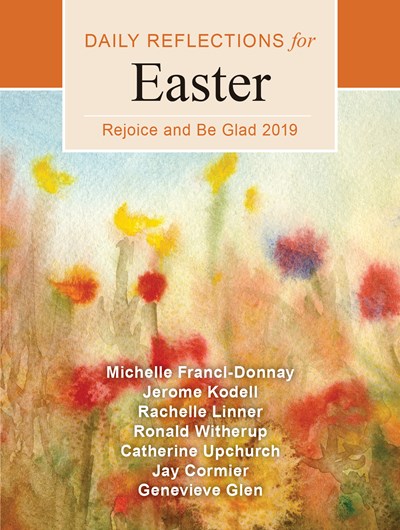 Join now Find out more
Publisher: Liturgical Press
ISBN: 9780814644133
Published: 01/03/2019
Description Author Information Reviews
There is no better season to renew one's relationship with God than Easter, the most joyful days of the church's year. Rejoice with these inspiring reflections on the daily Mass readings. In just minutes per day, the insightful meditations of Rejoice and Be Glad can help you embrace, live, and share the good news of the great Easter mystery. Introducing a splendid new annual resource for deepening prayer-in the tradition of our best-selling Advent/Christmas and Lent annual reflection guides! Rejoice and Be Glad is ideal for: Parish communities Schools Campus Ministry Programs Prayer Groups RCIA catechumens and candidates And more!

Michelle Francl-Donnay is a writer, teacher, wife and the mother of two twenty-something sons. She is a professor of chemistry at Bryn Mawr College and an adjunct scholar of the Vatican Observatory. Her writing about faith, science and life can be found at https://www.michellefrancldonnay.com/. She is the author of Not by Bread Alone: Daily Reflections for Lent 2020, and is a contributor to Give Us This Day, published by Liturgical Press. Jerome Kodell, OSB, is a monk of Subiaco Abbey, where he has honed both his biblical scholarship and his leadership skills as the former abbot. He is a contributor to Give Us This Day and the author of several books, including Twelve Keys to Prayer; Don't Trust the Abbot: Musings from the Monastery, The Eucharist in the New Testament; John the Baptist, Forerunner; Barnabas, Man for Others; and co-author of Waiting in Joyful Hope 2015-16 with Genevieve Glen, OSB. Rachelle Linner, a freelance writer and reviewer, has a master of theological studies from Weston Jesuit School of Theology. She writes frequently in Give Us This Day. Ronald D. Witherup, PSS, is superior general of the Sulpicians, an order of diocesan priests dedicated to initial and ongoing formation of priests. He holds a doctorate in biblical studies and is the author of numerous books and articles on Scripture, including The Word of God at Vatican II: Exploring Dei Verbum, and Biblical Fundamentalism, What Every Catholic Should Know, published by Liturgical Press. He is also a contributor to Give Us This Day. Catherine Upchurch serves as the director of Little Rock Scripture Study and the general editor of the Little Rock Catholic Study Bible. She brings years of adult faith formation experience to her writing and speaking. She is an associate editor of The Bible Today, a regular contributor to Give Us This Day, and the author of Christmas, Season of Wonder and Hope; Mary, Favored by God; Moses, Called and Equipped; and Hospitality, Welcoming the Stranger. Jay Cormier, DMin, is editor of Connections, a monthly newsletter of ideas and resources for homilists and preachers. He is also an adjunct professor of humanities and communications at St. Anselm College in Manchester, New Hampshire, and leads workshops for clergy and laity in preaching skills and liturgy. Cormier has contributed to many religious journals including America, Worship, and U.S. Catholic and is the author of several books, including The Deacon's Ministry of the Word and previous editions of Waiting in Joyful Hope: Daily Reflections for Advent and Christmas and Not by Bread Alone: Daily Reflections for Lent, published by Liturgical Press. Sister Genevieve Glen, OSB, is a nun of the contemplative Benedictine monastery of St. Walburga, where she has taught in the formation program and conducted retreats in the retreat house. She has also given retreats in many Benedictine monasteries of women and men. She is a poet, hymn text writer and essayist who contributes regularly to Give Us This Day. She co-authored the 2016 issue of Waiting in Joyful Hope with Jerome Kodell, OSB, and is the author of Not by Bread Alone 2017, Waiting in Joyful Hope 2018-19; and Sauntering Through Scripture: A Book of Reflections (2018) published by Liturgical Press.