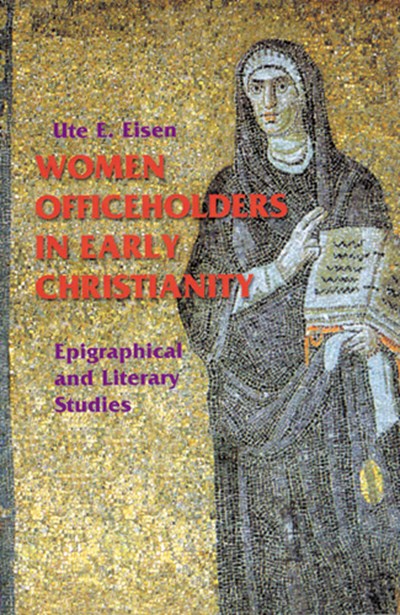 Join now Find out more
Publisher: Liturgical Press
ISBN: 9780814659502
Number of Pages: 336
Published: 01/05/2000
Width: 15.2 cm
Height: 22.9 cm
Description Author Information Reviews
Women Officeholders in Early Christianity is a scholarly investigation of the evidence for women holding offices of authority in the first several centuries of Christianity. Ute Eisen focuses on inscriptions and documentary papyri (private letters, official documents, contracts, and other such pieces) that have scarcely been considered before. Eisen presents the first extensive documentation of selected Greek and Latin inscriptions, plus a few documentary papyri, that witness to the existence of Christian women officeholders. The intent is to show the multiplicity of titles borne by women and to illustrate the narrowness of previous research on this topic. A single chapter is devoted to each of the titles of office or functional designations found in the sources. The epigraphical, papyrological, and literary witnesses are accordingly grouped by function. Topics are Apostles," "Prophets," "Teachers of Theology," "Presbyters," "Enrolled Widows," "Deacons," "Bishops," and "Stewards." Central to Women Officeholders in Early Christianity are the epigraphical witnesses. To this point they have been only marginally incorporated into research on women officeholders in the Church. In order to ensure correct interpretation, the majority of the inscriptions discussed have extensive documentation. They are organized geographically and chronologically. Besides the documentation they are commented on in the context of the existing literary sources. The book concludes with a chapter entitled "Source-Oriented Perspectives for a History of Christian Women Officeholders." The book also includes a bibliography of reference works, primary sources, and secondary sources. Ute E. Eisen is a Wissenschaftliche Assistentin at the Institute of New Testament Studies and Ancient Judaism at the University of Kiel, Germany. She has a doctorate in theology from the University of Hamburg. Her special areas of study include narrative analysis of Luke-Acts, methodology in New Testament studies, history of early Christianity, and gender studies. "

Gary Macy, PhD, teaches at the University of San Diego and is widely published in the areas of medieval theology and devotion.