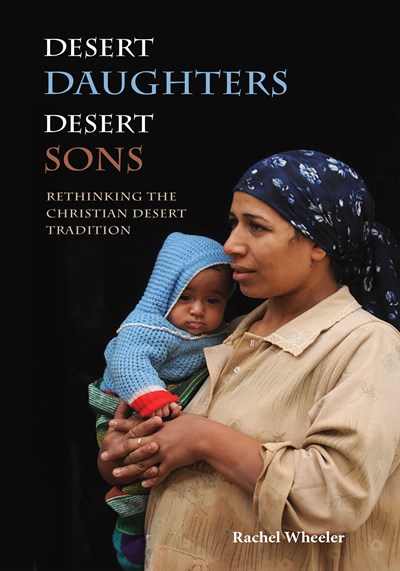 In Desert Daughters, Desert Sons, professor Rachel Wheeler argues that a new reading of the texts of the Christian desert tradition is needed to present the (often) anonymous women who inhabit the texts. Though these women may have been included by storytellers to provide a foil to the exemplary men in the stories' foreground, Wheeler demonstrates how women's persistence in places they were not welcome witnesses to truths about where wisdom may be sought and found. In this book, Wheeler allows these women's stories to critique the desert impulse that can create a spiritual life devoid of social relationships and responsibility.

Rachel Wheeler is assistant professor of spirituality at the University of Portland where she teaches Bible, ecospirituality, contemplative traditions, and arts as spiritual formation. Her degrees include a PhD in Christian spirituality from the Graduate Theological Union, an MA in theology, specializing in monastic studies, from Saint John's School of Theology, and an MA in English from Humboldt State University. She writes on desert spirituality and ecospiritual practice.

"With Desert Daughters, Desert Sons, Rachel Wheeler gives us an always-needed rereading of the desert fathers and mothers portrayed in the Apophthegmata Patrum or Sayings of the Desert Fathers. With her close readings of sayings from the alphabetical, anonymous, and systematic sayings, she challenges assumptions, peers into the margins, and offers new insights into the 'peripheral women' in early-monastic stories and sayings. She re-stories the texts from a perspective that focuses with new insight mostly on the daughters of the desert." Tim Vivian, Professor Emeritus of Religious Studies, California State University Bakersfield "According to a famous monastic saying, the ancient Egyptian desert was the place where 'there are no women.' But Rachel Wheeler shows that this was not and could not be so. In this thought-provoking study of desert spirituality, she invites us to turn our focus away from the solitary male heroes of monastic stories and notice the many women who inhabit the periphery of those stories or who become hauntingly present in their absence. By attending to desert daughters as well as desert sons, Wheeler uncovers the pain caused by distancing ourselves from one another, and she offers us a way of love, not only for those traveling alone in their deserts, but also for those seeking renewed community among men and women in cities, churches, and families." David Brakke, The Ohio State University "In Desert Daughters, Desert Sons, Rachel Wheeler skillfully turns the ship of contemporary spiritual praxis with the twin rudders of creatively reading early Christian desert literature and critically applying theoretical considerations to the texts and characters of Christian late antiquity. Wheeler uncovers the hidden waters of women's voices and concerns that lie just under the surface of these dusty, male-centered texts, and in so doing floods the Egyptian desert with hidden communities necessary for spiritual formation-including forming oneself by oneself and allowing marginalized voices to form one's own journey. In piloting the reader through these waters, Wheeler invites contemporary practitioners of Christian spirituality to refract early Christian wisdom in ways that emphasize the necessities of community and women's voices, so long forgotten and underappreciated in the spiritual experience." Zachary B. Smith, PhD, Associate Professor of Theology (History of Christianity) and faculty in the Women and Gender Studies Program at Creighton University "The sayings and stories of the fourth- and early fifth-century Egyptian desert have long had an appeal far beyond the monastic movement. They beguile by their pithy wisdom, making it easy to forget that the stories arose in particular historical circumstances and convey cultural assumptions and attitudes that can shock the modern reader. This is especially true of their seemingly casual misogyny and contempt for conventional society. Rachel Wheeler explores the contradictions in a literature that can be so moving and yet so jarring, focusing as it often did on the devaluing of women and family relationships in a new ascetic social dynamic based on spiritual fatherhood. Wheeler's creative deconstruction of these ancient texts allows them to speak in a fresh voice while encouraging dialogue about their embedded assumptions. This is precisely the kind of reading we need so that classics of the monastic tradition can continue to inspire." Fr. Columba Stewart, OSB, DPhil, Executive Director, Hill Museum & Manuscript Library, Collegeville, Minnesota "A beautiful, bold, and creative evocation of the representation and experience of women in the world of early Christian monasticism. With compassion, nuance, and courage, Rachel Wheeler offers us a feminist re-reading of these early monastic traditions that is both liberating and healing. Thanks to her painstaking scholarship and imaginative readings of the ancient texts, we can now encounter the lives and voices of women who have too long been obscured from view. But more than this, her work invites us to rethink the meaning of the tradition as a whole. An original and important work." Douglas E. Christie, PhD, Professor, Department of Theological Studies, Loyola Marymount University "Those familiar with the apophthegmata of early monasticism will appreciate Dr. Wheeler's close reading of the stories of monks' characterizations of women, especially those that discount women so as to protect men's virtue. Dr. Wheeler peers 'into the margins of the stories' and offers a much-needed midrash and critique as invitations to read between the lines to present alternative interpretations for readers, seeking wisdom and desiring validation for living the Christian life today." Mary Forman, OSB, Prioress, Monastery of St. Gertrude, Idaho "In Desert Daughters, Desert Sons, Rachel Wheeler offers a rich, robust reading of the Christian desert tradition. Observant of the multifaceted presence of women in desert literature, and the sayings collections in particular, Wheeler's incisive analysis overturns normative assumptions about spiritual formation. By employing the common category of offspring, Wheeler exposes a quest for spiritual becoming grounded in community. Wheeler's approach and findings are welcome; they merit examination and application in future scholarship. This is a timely and important book." Bernadette McNary-Zak, Associate Professor of Religious Studies, Rhodes College