Practices of Dialogue in the Roman Catholic Church 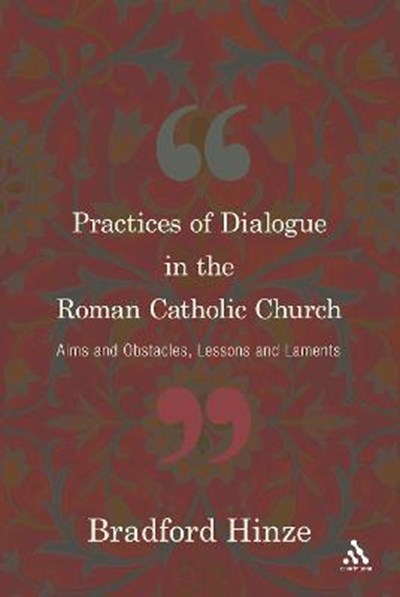 Practices of Dialogue in the Roman Catholic Church

QTY
Add to Basket
Publisher: Bloomsbury Publishing PLC
ISBN: 9780826417213
Number of Pages: 336
Published: 04/03/2006
Description Author Information Reviews
One of the principal buzzwords of the Second Vatican Council (1963-65), along with collegiality, co-responsibility, full participation, and aggiornamento, was dialogue. This is a history of how the practices of dialogue have actually worked or failed to work at every level of the church over the past forty years. Beginning at the most basic level, that of the parish, the book moves up the ecclesiastical ladder from parish councils, to diocesan synods, to the (Roman) synod of bishops. The book moves laterally as well to include ecumenical and interreligious dialogues. A chapter is devoted to the fractious Call to Action Conference, initiated by the U.S. bishops in 1976; another to the new inclusive style of drafting pastoral letters by the U.S. bishops - "The Challenge of Peace" (1983), "Economic Justice for All" (1986), and the never approved pastoral on women ("Partners in the Mystery of Redemption"). A further chapter is devoted to Cardinal Bernardin's Catholic Common Ground Initiative, which is still going on, though it was initially publicly attacked by four U.S. cardinals. Finally, there is a chapter on what was perhaps the most radical and far-reaching exercise of dialogue of all, namely, the dialogical and democratic processes by which women religious revised their constitutions. This is a cautionary tale, filled with thick description of advances and retreats. In a curious way, the book is a sequel to the multi-volume "History of the Second Vatican Council", edited by Giuseppe Alberigo and Joseph Komonchak If those volumes tell us what transpired at the council, Hinze's volume tells us what happened when the council fathers went home and all the good ideas of the council were either put into effect or left to gather dust in the dead-letter bin. Vatican Council II is an ongoing experiment, and "Practices of Dialogue" is a series of reports from the labs.

Bradford E. Hinze is associate professor of theology at Marquette University. He is the author of Narrating History, Developing Doctrine: Friedrich Schleiermacher and Johann Sebastian Drey and editor or co-editor of four others.

"For teachers and scholars, this book provides good, readable introductions to each of the selected topics, including helpful historical background and bibliographic references. For those invested in one or another of the dialogues featured therein, it offers something far more valuable: an opportunity to connect our specific endeavours to a more comprehensive vision and to reflect on our practices more critically, in light of wisdom gained in other contexts. If, as Hinze asserts, dialogue "provides the most important means to promote genuine communion" within the Church (259), then his study represents a very useful resource for fostering such dialogue and promoting such communion." - Reid B. Locklin, Toronto Journal of Theology, July 2008--Sanford Lakoff "Toronto Journal Of Theology "