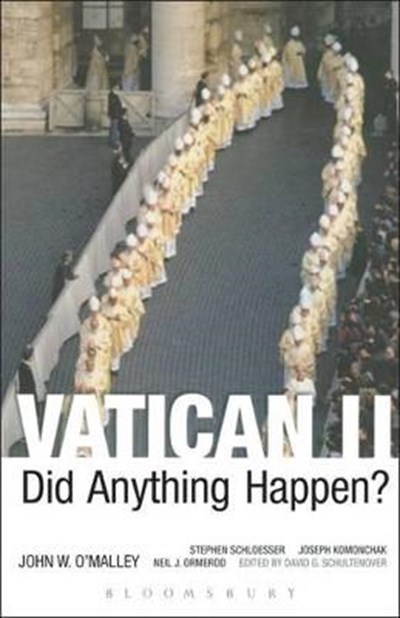 QTY
Add to Basket
Publisher: Bloomsbury Publishing PLC
ISBN: 9780826428905
Number of Pages: 192
Published: 15/01/2008
Width: 13.8 cm
Height: 21.6 cm
Description Author Information Reviews
For 40 years a battle has been waged over Vatican II between conservatives and liberals, between those who want to go "back to the sources" and those who champion "the spirit of the council." Benedict XVI is clearly one of those who started out as a liberal only to end up in the conservative camp. "Vatican II: Did Anything Happen?" is clearly on the side of those who think something unprecedented happened, that a genie was let out of the bottle that will never be stuffed back.Comprised mainly of a collection of articles, mostly but not all from Theological Studies, that are without qualification some of the best analysis of the council ever written, this book is a long overdue look at one of the most controversial and revolutionary chapters in the history of the Catholic Church.

John W. O'Malley, SJ, is one of the most highly respected and widely read Roman Catholic historians in the United States. He is the author of Four Cultures of the West (Harvard University Press) and The First Jesuits (Harvard University Press), among others. Stephen Schloesser, S.J., is associate professor of history at Boston College, USA. Joseph A. Komonchak holds the John and Gertrude Hubbard Chair in Religious Studies at The Catholic University of America, USA. Neil J. Ormerod is professor of theology at Australian Catholic University, Strathfield, N.S.W, Australia. David G. Schultenover, S.J., is professor of theology at Marquette University and editor-in-chief of Theological Studies.

"The initiative to publish these interrelated studies under one cover is to be lauded. This small book should be used as a serious introduction to the study of Vatican II, not that it has become a historical event." Leo Laberge, OMI, Theoforum Vol. 39 No. 3, 2008--Sanford Lakoff