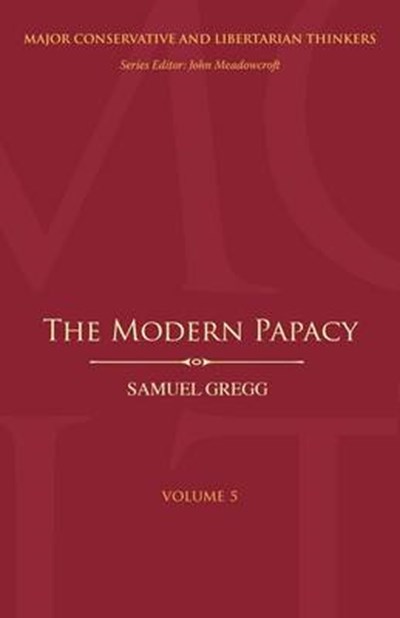 QTY
Add to Basket
Publisher: Bloomsbury Publishing PLC
ISBN: 9780826430113
Number of Pages: 176
Published: 15/07/2009
Width: 13.8 cm
Height: 21.6 cm
Description Author Information Reviews
This is the fifth volume in the "Major Conservative and Libertarian Thinkers Series". Since the dawn of the Enlightenment, modernity and the Papacy have experienced a difficult though never severed relationship. "Modern Papacy" goes beyond the caricatures to demonstrate how the popes - specifically John Paul II and Benedict XVI - have articulated a sophisticated critique of the post-Enlightenment world, one that acknowledges the real progress made in modernity while simultaneously highlighting its political and philosophical shortcomings. Far from falling on deaf ears, the nature of their engagement with the modern world has sparked criticism and praise from Catholics and non-Catholics alike - sometimes in surprising ways. Whether the subject is faith and reason, religion and the modern sciences, the roots and future of Europe, or the origin and ends of human freedom, John Paul II and Benedict XVI pose questions that simply cannot be ignored, regardless of whether one likes their answers. "Major Conservative and Libertarian Thinkers" provides comprehensive accounts of the works of seminal conservative thinkers from a variety of periods, disciplines and traditions - the first series of its kind. Even the selection of thinkers adds another aspect to conservative thinking, including not only theorists but also thinkers in literary forms and those who are also practitioners. The series comprises twenty volumes, each including an intellectual biography, historical context, critical exposition of the thinker's work, reception and influence, contemporary relevance, bibliography including references to electronic resources and an index.

Dr Gregg is Director of Research at the Acton Institute. Dr Meadowcroft is Lecturer in Public Policy at King's College London and the author of The Ethics of the Market (Palgrave, 2005) and co-author of Rescuing Social Capital from Social Democracy (Institute of Economic Affairs, 2007).

'Gregg's work is a useful introduction to the thought of Wojtyla and Ratzinger and thus essential reading for anyone engaged in serious study of the present-day papacy.'--Sanford Lakoff