Bedfordshire Churches in the Nineteenth Century

Part 1 Parishes A to G 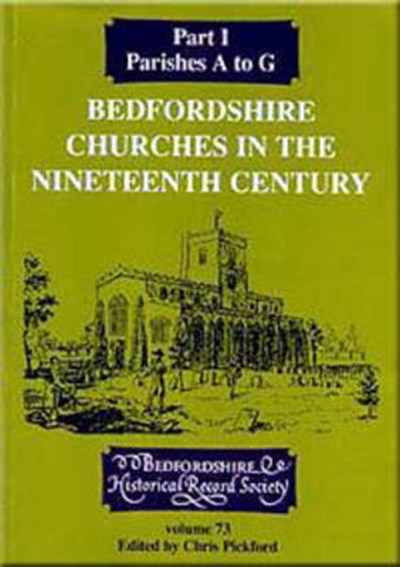 Bedfordshire Churches in the Nineteenth Century

Part 1 Parishes A to G

QTY
Add to Basket
Publisher: Boydell & Brewer Ltd
ISBN: 9780851550565
Number of Pages: 334
Published: 01/01/1994
Width: 14.8 cm
Height: 20.9 cm
Description Author Information Reviews
This is the first in a series of four volumes describing Bedfordshire's parish churches in detail. It is based on new and specially commissioned research, bringing together original official sources and contemporary accounts. This volume covers Ampthill to Gravenhurst. Many churches are illustrated, often with unusual drawings, watercolours, lantern slides, etc. Adding much new material to previously published accounts, the series will be an invaluable aid to research.

Chris Pickford studied history at Leicester and qualified as an archivist at University College London. He joined the staff of Bedfordshire County Record Office in 1977, becoming County Archivist in 1986. He left in 1998 to become Director of the Church of England Record Centre (CERC) in London. While at BCRO he took an active part in BHRS. He is an acknowledged expert on clocks and bells. Among a wide range of historical interests, architectural history and the study of buildings rank highest. Since leaving CERC in 2001 he has worked freelance. His revised edition of the Pevsner Buildings of England volume on Warwickshire, his native county, was published in 2016. Alan Cirket was a member of staff in Bedfordshire County Record Office from 1936 to 1983, except for war service. He was also honorary curator of the Bunyan Museum, Bedford. Andrew Underwood (1934-2012) taught in Ampthill and then at Bedford Modern School from 1966 to 1989, where he was subsequently the school archivist. He researched and wrote extensively on his native Ampthill. Anne Buck OBE (1910-2005) was a fashion historian and museum curator, first at Luton museum (1938-1947) and later at the Platt Hall, Manchester (1947-1972) where she was keeper of the Gallery of English Costume. Bernard Cashman (1920-1996) was a consultant orthopaedic surgeon at Bedford General Hospital from 1961 to 1985 and held an honorary research post at the Kennedy Institute of Rheumatology, Oxford. On his retirement, he was commissioned to write a history of the hospital and was guided in his research by Patricia Bell. He also wrote a history of Bedford Asylum (described in one review as 'a meticulously detailed history'). Colin Chapman is a social and family historian, a founder member of the Bedfordshire Family History Society and a Vice-President of the International Federation of Family History Societies. He writes and lectures on family and social history. David Baker taught history at Bedford School, then lectured in history at Portsmouth Polytechnic from 1968 to 1972 before returning to Bedford to become Bedfordshire County Archaeologist in 1972 and County Conservation and Archaeology Officer in 1974. David Bushby was a school teacher in Biggleswade. He obtained a second degree in the history of education and has published on education in Bedfordshire and other local history topics. Edwin Welch (1927-1998) was an archivist and worked in various parts of England from 1951 to 1971 and subsequently in Canada. He was an expert and writer on Dissenting history. Elizabeth Moser has been a JP and treasurer of the Bedford branch of the Historical Association. Eric Stockdale was called to the Bar in 1950 and appointed a Circuit judge in the 1970s. He is a senior bencher of the Middle Temple. He has published many articles and books on criminal justice and historical topics, including two works inspired by the links of many leaders of the American Revolution with the Middle Temple. His book From wig and pen to computer: reflections of a legal author (London, Wildy, Simmonds and Hill, 2008) is about his experiences as a legal author and one chapter deals with crime and punishment in Bedfordshire. Hermann Wellenreuther is Professor of Modern History at the University of Goettingen and the author of books and articles on eighteenth century political and religious history in Europe and North America. James Collett-White is an archivist and has worked at the Isle of Wight Record Office (1970-1974), Bedfordshire Archives and Records Service (1975-2012) and has been Archivist to Sir Samuel Whitbread since 1997. He has contributed to several BHRS volumes and was, for a short time, the Society's general editor. He has published articles to celebrate the hundredth anniversaries of Bedfordshire Archives and Records Service and BHRS and researches, lectures and writes on history in Bedfordshire. He is working with Bob Ricketts and David Newman on another volume for BHRS on the Turner family of Milton Ernest. Margaret McGregor was an archivist in the Bedfordshire County Record Office for several years before returning to her native Bristol to work in the record office there. Professor Richard Marks FSA is a member of the History of Art Department at Cambridge University and specialises in medieval art, on which he has published extensively. He was born in Bedfordshire and has a long-standing interest in the county's histor Richard Wildman (1947-2018) was an authority on the history of Bedford and author of numerous local history books, including Bedford - A Pictorial History (1991) and Bedford's Motoring Heritage, with Alan Crawley (2003). He was a long-standing member of BHRS Council and was an officer of Bedford Architectural, Archaeological and Local History Society (opens in a new window) for well over forty years. Simon Houfe FSA is a journalist, author and Bedfordshire historian. He was on the staff of the Victoria and Albert Museum and is the author of The Dictionary of British Illustrators and Caricaturists and former editor of The Antique Collector. Sylvia Woods was an archivist at Bedfordshire and Luton Archives and Records Service until the 1990s. She has been Secretary and, later, Chairman of the Bedford Archaeological Society (now the Bedford Architectural, Archaeological and Local History Society (opens in a new window)) and a member of BHRS Council.