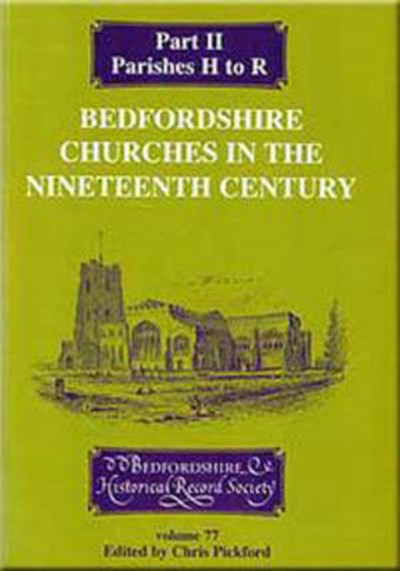 QTY
Add to Basket
Publisher: Boydell & Brewer Ltd
ISBN: 9780851550602
Number of Pages: 316
Published: 01/01/1998
Width: 14.8 cm
Height: 20.9 cm
Description Author Information Reviews
This is the last in a series of four volumes describing Bedfordshire's parish churches in detail. The aim is to present a detailed account of each church together with text from five important nineteenth century sources. It is based on specially commissioned research, bringing together original official sources and contemporary accounts. Many churches are illustrated, often with unusual drawings, watercolours, lantern slides, etc. This final volume comprises a description of the newer, twentieth century churches in the county; a summary of the main stages of restoration for each of the older churches; addenda and corrigenda to parts 1-3; and an analytical index to the whole series.

Chris Pickford studied history at Leicester and qualified as an archivist at University College London. He joined the staff of Bedfordshire County Record Office in 1977, becoming County Archivist in 1986. He left in 1998 to become Director of the Church of England Record Centre (CERC) in London. While at BCRO he took an active part in BHRS. He is an acknowledged expert on clocks and bells. Among a wide range of historical interests, architectural history and the study of buildings rank highest. Since leaving CERC in 2001 he has worked freelance. His revised edition of the Pevsner Buildings of England volume on Warwickshire, his native county, was published in 2016. Isobel Thompson (?-1985) was a teacher and volunteer at Bedfordshire County Record Office. Patricia Bell was Bedfordshire County Archivist 1968-1986 and also General Editor for BHRS. She both edited and contributed to many BHRS volumes.