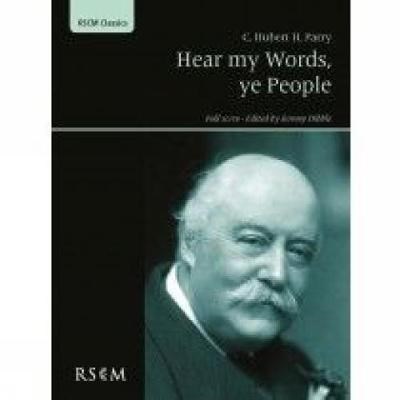 Join now Find out more
Publisher: Royal School of Church Music
ISBN: 9780854022762
Published: 30/06/2018
Description Author Information Reviews
Hear my Words, ye People was composed by Parry in 1893 as a commission for the Salisbury Diocesan Choral Association Festival, which took place on 10 May 1894 in Salisbury Cathedral under the composer's direction. It was a rare example of Parry's use of the ambitious 'verse anthem' form which his immediate forebears - S.S. Wesley and Stainer - had written earlier in the 19th century. However, in this instance, Parry adapted the form to suit the grand scale of the occasion. With the participation of almost 100 local choirs (2,000 singers), supported by the band of the Royal Marine Light Infantry, Portsmouth, the musical structure and material had to suit the range of choral abilities as well as marshalling the vast number of voices. This original version was left in manuscript and remainded unknown: this is its first publication.

Jeremy Dibble studied music at Trinity College, Cambridge under Richard Marlow, Philip Radcliffe, Peter le Huray and Robin Holloway. After completing his PhD on Parry's music at Southampton University, under Peter Evans, he lectured in music at University College, Cork, for six years before moving in 1993 to Durham University, where he is now a Professor of Music. Widely regarded as the leading authority on British and Irish music of the nineteenth and twentieth centuries, he is the author of monographs on Parry, (1992), Stanford (2002), Stainer (2007) and others. In 2010 he was made an Honorary Fellow of the RSCM, for whom he has produced many editions.