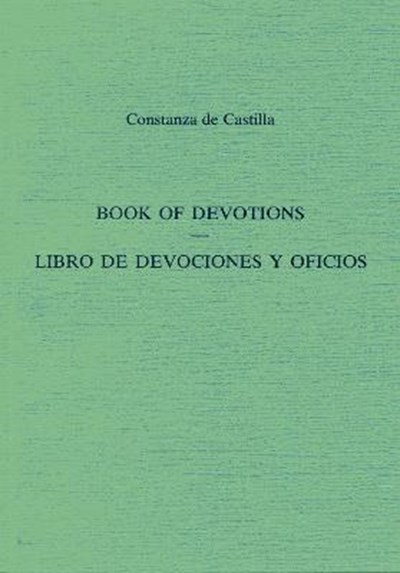 Publisher: University of Exeter Press
ISBN: 9780859894876
Number of Pages: 123
Published: 01/02/1998
Description Author Information Reviews
This, the first edition of the devotionary composed by Constanza de Castilla, granddaughter of Pedro I and prioress of the monastery of Santa Domingo el Real Madrid from approximately 1416 to 1465, is an important contribution to the small body of writing by medieval Spanish women available today. Comprising a variety of prayers and liturgy offices in Spanish and Latin, the book provides moving evidence of the beliefs, experience, and expression of religious women in Spain of the later Middle Ages.

"This well-prepared edition is a valuable contribution to the study of women's literature and religious literature in medieval Spain." (Modern Language Review, 94.3, 1999) "... A text of considerable interest and significance ... It is interesting to observe how, perceptibly, as modern scholarly editions make available the writings of such women, our knowledge of the contours of the learning, literary culture and writing of late-medieval women-particularly of the mystics and visionaries-grows, alters, and comes into focus." (Mystics Quarterly, Volume 24 #4, December 1998)