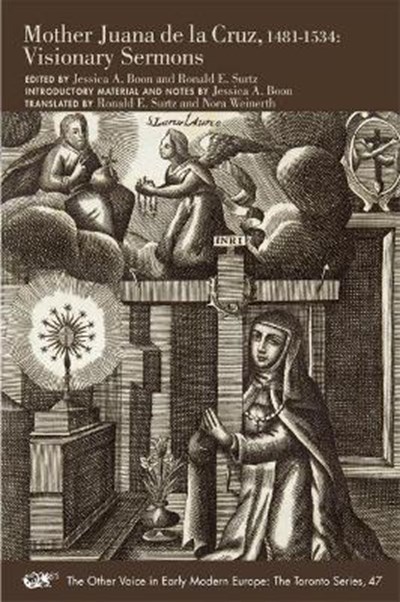 Publisher: Arizona Center for Medieval & Renaissance Studies,US
ISBN: 9780866985499
Number of Pages: 244
Published: 11/04/2016
Width: 15.6 cm
Height: 23.5 cm
Description Author Information Reviews
Juana de la Cruz (1481-1534) is a unique figure in the history of the Catholic Church, thanks to her public visionary experiences during which she lost consciousness, while a deep voice, identifying itself as Christ, issued from her, narrating the feasts and pageants taking place in heaven. Juana's so called "sermons," collected in a manuscript called Libro del Conorte, form a fascinating window into Castilian religiosity in the early sixteenth century. There is much to reap from these sermons concerning Spanish Renaissance culture, theology, mysticism, gender roles, and interreligious interactions.

Jessica A. Boon is Assistant Professor of Religious Studies at The University of North Carolina-Chapel Hill. She is the author of The Mystical Science of the Soul: Medieval Cognition in Bernardino de Laredo's Recollection Method. Ronald E. Surtz is Professor of Spanish and Portuguese Languages and Cultures at Princeton University. He is the author of The Guitar of God: Gender, Power, and Authority in the Visionary World of Mother Juana de la Cruz (1481-1534) and Writing Women in Late Medieval and Early Modern Spain: The Mothers of Saint Teresa of Avila. Nora Weinerth is an independent scholar who lives in New York.