Everyone Belongs to God 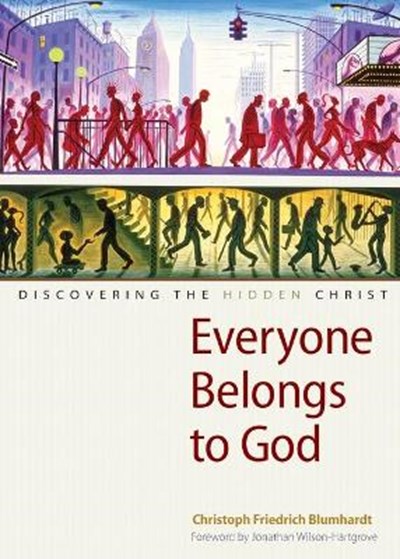 Everyone Belongs to God

eBook FAQ
Add to Basket
Publisher: Plough Publishing House
ISBN: 9780874866469
Number of Pages: 163
Published: 01/05/2015
Width: 13.6 cm
Height: 19 cm
Description Author Information Reviews
A pastor's frank advice for Christians who want to bring the gospel to their neighbors. Gold Medal Winner, 2016 Illumination Book Award in ministry/mission, Independent Publishers How can Christians represent the love of Christ to their neighbors (let alone people in foreign countries) in an age when Christianity has earned a bad name from centuries of intolerance and cultural imperialism? Is it enough to love and serve them? Can you win their trust without becoming one of them? Can you be a missional Christian without a church? This provocative book, based on a recently uncovered collection of 100-year-old letters from a famous pastor to his nephew, a missionary in China, will upend pretty much everyone's assumptions about what it means to give witness to Christ. Blumhardt challenges us to find something of God in every person, to befriend people and lead them to faith without expecting them to become like us, and to discover where Christ is already at work in the world. This is truly good news: No one on the planet is outside the love of God. At a time when Christian mission has too often been reduced to social work or proselytism, this book invites us to reclaim the heart of Jesus' great commission, quietly but confidently incarnating the love of Christ and trusting him to do the rest.

Pastor, politician, and author, Christoph Friedrich Blumhardt (1842-1919) with his unconventional ideas about the kingdom of God, profoundly influenced a whole generation of European seekers. Among the luminaries he influenced were Dietrich Bonhoeffer, Emil Brunner, Oscar Cullman, and Karl Barth. Yet his vision and witness are still waiting to be discovered by most Americans, few of whom have had access to his works. He carried forward the work of his father, Johann Christoph Blumhardt (1805-1880), who is regarded by many as the key figure of German pietism.