Finding Peace and Purpose in a Long Life 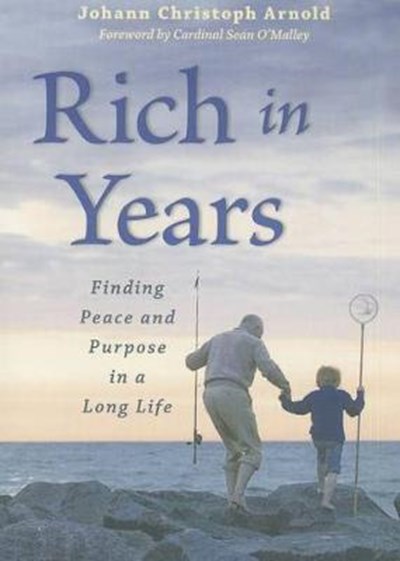 Finding Peace and Purpose in a Long Life

eBook FAQ
Add to Basket
Publisher: Plough Publishing House
ISBN: 9780874868975
Number of Pages: 183
Published: 25/05/2014
Width: 13.6 cm
Height: 19 cm
Description Author Information Reviews
Johann Christoph Arnold, admired by such prominent spiritual and inspirational leaders as Nelson Mandela, Mother Teresa, Cardinal Dolan, Pete Seeger, and many more, offers answers to the question: Why shouldn't growing older be rewarding? Arnold, whose books have helped over a million readers through life's challenges, shows us the spiritual riches that age has to offer. Now in his seventies, Arnold finds himself personally facing the challenges of aging with grace. With a foreword by Cardinal Sean O'Malley, Rich in Years covers the significant topics facing the aging, the elderly, and their family and caregivers: accepting changes, combatting loneliness, and continuing on with purpose and hope. Going beyond mere inspiration, Arnold does not shy away from such difficult topics as coping with dementia, the prospect of dying, and enduring with dignity. Through faith and a true spirituality, he says, we can find acceptance and serenity. Johann Christoph Arnold knows, from decades of pastoral experience, what older people and their caregivers can do to make the most of the journey of aging. In this book, he shares stories of people who, in growing older, have found both peace and purpose. Praising Rich in Years, Cardinal Dolan, Archbishop of New York, writes, In simple language, Arnold gives hope-filled insights into the trials of aging for people of all ages. Pastor Arnold's book challenges those rich in years to also remain rich in faith.

People have come to expect sound advice from Johann Christoph Arnold, an award-winning author with over a million copies of his books in print in more than 20 languages. A noted speaker and writer on marriage, parenting, and end-of-life issues, Arnold is a senior pastor of the Bruderhof, a movement of Christian communities. With his wife, Verena, he has counseled thousands of individuals and families over the last forty years. His books include Why Forgive?, Rich in Years, Seeking Peace, Cries from the Heart, Be Not Afraid, and Why Children Matter. Arnold's message has been shaped by encounters with great peacemakers such as Martin Luther King Jr., Mother Teresa, Cesar Chavez, and John Paul II. Together with paralyzed police officer Steven McDonald, Arnold started the Breaking the Cycle program, working with students at hundreds of public high schools to promote reconciliation through forgiveness. This work has also brought him to conflict zones from Northern Ireland to Rwanda to the Middle East. Closer to home, he serves as chaplain for the local sheriff's department. Born in Britain in 1940 to German refugees, Arnold spent his boyhood years in South America, where his parents found asylum during the war; he immigrated to the United States in 1955. He and his wife have eight children, 42 grandchildren, and one great-grandchild. They live in upstate New York. To learn more visit www.richinyears.com