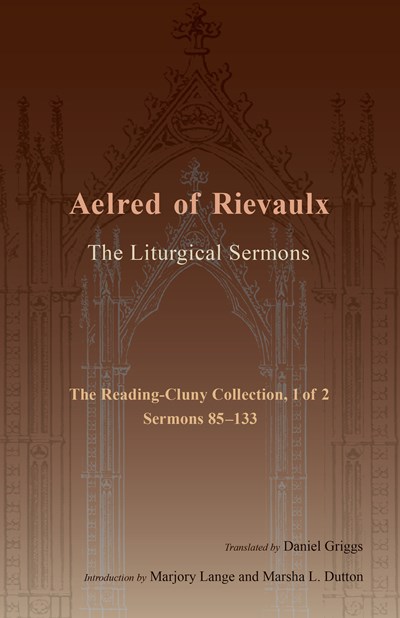 Join now Find out more
Publisher: Liturgical Press
ISBN: 9780879071813
Number of Pages: 432
Published: 15/02/2021
Width: 14 cm
Height: 21.6 cm
Description Author Information Reviews
Aelred (1110-1167) served Rievaulx Abbey, the second Cistercian monastery in England, for twenty years as abbot. During his abbacy he wrote thirteen treatises, some offering spiritual guidance and others seeking to advise King Henry II. He also wrote thirty-one sermons as a commentary on Isaiah 13-16 and 182 surviving liturgical sermons, mostly addressed to his monks. This volume contains the first half of Aelred's ninety-eight liturgical sermons from the Reading-Cluny collection, Sermons 85 through 133. For the most part, the collection follows the liturgical year, beginning in this volume with three sermons for Advent and ending with five for Pentecost and three for the Solemnity of the Holy Trinity. Sermons 134 through 182, from the Nativity of John the Baptist (June 24) through the Feast of All Saints, will appear in CF 87. These sermons appear to contain evidence of Aelred's editorial additions to the autograph of the sermons, as he added selections from patristic and medieval authors within the sermons and between them.

Daniel Griggs has an MA in medieval studies and a PhD in Byzantine theology, both from the University of Leeds. He teaches Latin at Butte College near Chico, California, and translates medieval texts from Greek and Latin. He is currently translating Aelred of Rievaulx's sermons from the Reading collection, from Gaetano Raciti's critical edition in Corpus Christianorum, Continuatio Mediaevalis 2C. Marsha L. Dutton, professor of medieval literature and director of graduate studies in English at Ohio University, is a longtime student of the works of Aelred of Rievaulx and of other twelfth-century Cistercian writers. She is associate editor of Cistercian Studies Quarterly. In addition to her many articles on Cistercian thought, Dutton has written the introduction to Vita Aelredi (CF 57) and edited Aelred's The Historical Works and Lives of the Northern Saints (CF 56, 71) as well as preparing a critical edition of Aelred's Pastoral Prayer (CF 73). She was one of the editors of Truth as Gift: Studies in Cistercian History Honoring John R. Sommerfeldt (CS 204).