Josiah's Festival Scroll for the Fall of Assyria 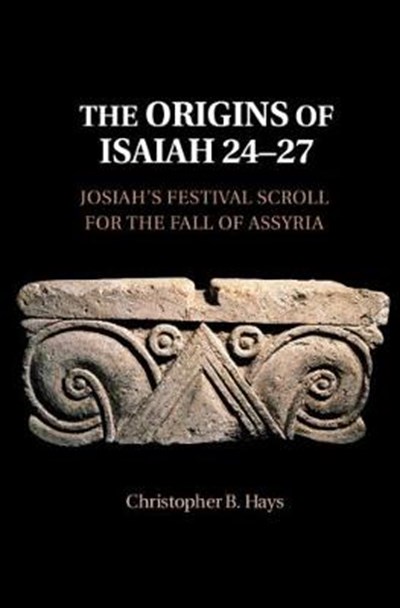 Josiah's Festival Scroll for the Fall of Assyria

eBook FAQ
Add to Basket
Publisher: Cambridge University Press
ISBN: 9781108471848
Number of Pages: 346
Published: 27/06/2019
Width: 15.6 cm
Height: 23.5 cm
Description Author Information Reviews
Isaiah 24-27 has been an enduring mystery and a hotly contested text for biblical scholars. Early scholarship linked its references to the dead rising to the New Testament. These theories have remained influential even as common opinion moderated over the course of the twentieth century. In this volume, Christopher B. Hays situates Isaiah 24-27 within its historical and cultural contexts. He methodically demonstrates that it is not apocalyptic; that its imagery of divine feasting and conquering death have ancient cognates; and that its Hebrew language does not reflect a late composition date. He also shows how the passage celebrates the receding of Assyrian power from Judah, and especially from the citadel at Ramat Rahel near Jerusalem, in the late seventh century. This was the time of King Josiah and his scribes, who saw a political opportunity and issued a peace overture to the former northern kingdom. Using comparative, archaeological, linguistic, and literary tools, Hays' volume changes the study of Isaiah, arguing for a different historical setting than that of traditional scholarship.

Christopher B. Hays holds the D. Wilson Moore Chair of Ancient Near Eastern Studies at Fuller Theological Seminary, California. In 2013, he won the Manfred Lautenschlaeger Award for Theological Promise for Death in the Iron Age II and in First Isaiah (2011). He is also the author of Hidden Riches: A Sourcebook for the Comparative Study of the Hebrew Bible and Ancient Near East (2014).