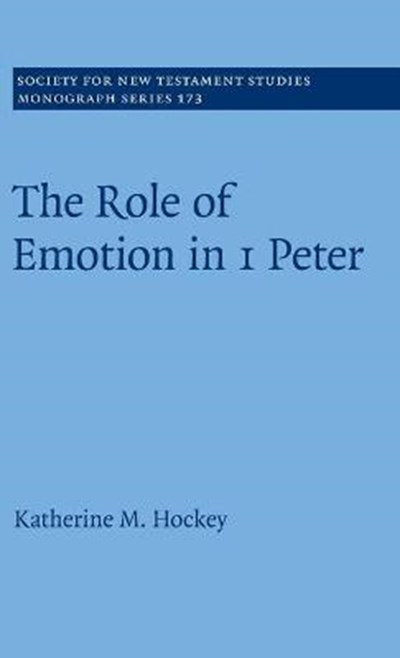 eBook FAQ
Add to Basket
Publisher: Cambridge University Press
ISBN: 9781108475464
Number of Pages: 310
Published: 24/01/2019
Width: 14.5 cm
Height: 22.4 cm
Description Author Information Reviews
In this book, Katherine M. Hockey explores the function of emotions in the New Testament by examining the role of emotions in 1 Peter. Moving beyond outdated, modern rationalistic views of emotions as irrational, bodily feelings, she presents a theoretically and historically informed cognitive approach to emotions in the New Testament. Informed by Greco-Roman philosophical and rhetorical views of emotions along with modern emotion theory, she shows how the author of 1 Peter uses the logic of each emotion to value and position objects within the audience's worldview, including the self and the other. She also demonstrates how, cumulatively, the emotions of joy, distress, fear, hope, and shame are deployed to build an alternative view of reality. This new view of reality aims to shape the believers' understanding of the structure of their world, encourages a reassessment of their personal goals, and ultimately seeks to affect their identity and behaviour.

Katherine M. Hockey is the inaugural Kirby Laing Postdoctoral Fellow in New Testament Studies at the University of Aberdeen. She is co-editor of Muted Voices of the New Testament: Readings in the Catholic Epistles and Hebrew (2017) and Ethnicity, Race, Religion: Identities and Ideologies in Early Jewish and Christian Texts, and in Modern Biblical Interpretation (2018).