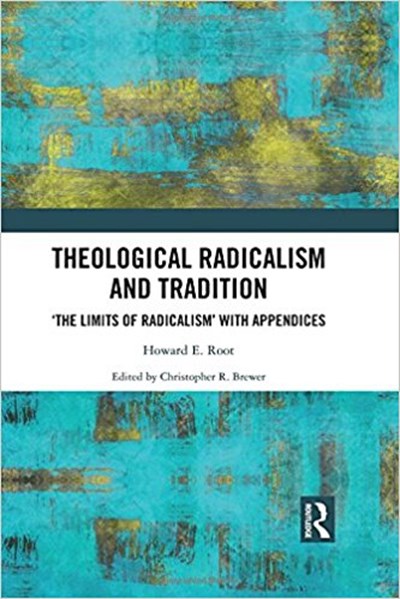 eBook FAQ
Add to Basket
Publisher: Routledge
ISBN: 9781138092464
Number of Pages: 166
Published: 31/10/2017
Width: 15.6 cm
Height: 23.4 cm
Description Author Information Reviews
‘The limits of radicalism are those which end not in chaos but in the breaking of fresh ground.’ Howard E. Root Previously unpublished––and only recently rediscovered by Dr Christopher R. Brewer in an uncatalogued box in the archives of Lambeth Palace Library––Canon Howard E. Root’s 1972 Bampton Lectures, ‘The Limits of Radicalism’, have to do with nothing less than ‘what theology is’, a topic no less relevant today than it was in 1972. Against the radical reductionism of his time, Root defended the integrity of theology and ‘theological truth’. Advocating a ‘backward-looking’ radicalism, he thought that tradition should display ‘recognisable continuity’, and yet at the same time––against reductionistic tendencies––that it might be enriched and enlarged via a wide variety of ‘additive imagery’ including, though not limited to, poetry and pop art, music and even television. We must ‘begin where we are’, said Root, for we cannot, in the manner of Leonard Hodgson, ‘think ourselves into the minds and feelings of men 2000 years ago.’ In this volume, which begins with a substantial, mostly biographical introduction, Dr Brewer argues that Root––a backward-looking radical who defended metaphysics and natural theology, and insisted that theologians look to the arts as theological resources––anticipates the work of David Brown and others concerned with tradition and imagination, relevance and truth. A fascinating glimpse into the recent history of British Christianity, Root’s lectures, as well as the related appendices, are essential reading for theologians interested in the dynamics of a developing tradition and the theme of openness, as well as those with a particular interest in 1960s Cambridge radicalism and the British reception of the Second Vatican Council.

Canon Howard E. Root (1926-2007) was a significant voice in post-war, British Christianity. Chaplain (1954-56) and then Dean (1956-66) of Emmanuel College, Cambridge, he was later appointed the first and last Professor of Theology at the University of Southampton (1966-81). The youngest official Anglican observer at the Second Vatican Council, Root was a member of the Joint Preparatory Commission, as well as the first phase of the Anglican-Roman Catholic International Commission, and during this same time chaired the Archbishop's Commission on the Christian Doctrine of Marriage (1968-71). A member of the academic council at the Tantur Ecumenical Institute in Jerusalem, he was appointed Pope Hadrian VI Professor at the University of Louvain in 1979, and served as the Director of the Anglican Centre in Rome (from 1981), as well as Visiting Professor at the Gregorian University in Rome (from 1984) until his retirement in 1991. Christopher R. Brewer (PhD, St And) is a Program Officer of the Templeton Religion Trust in Nassau, The Bahamas. He has edited or co-edited six volumes including Christian Theology and the Transformation of Natural Religion: From Incarnation to Sacramentality--Essays in Honour of David Brown.