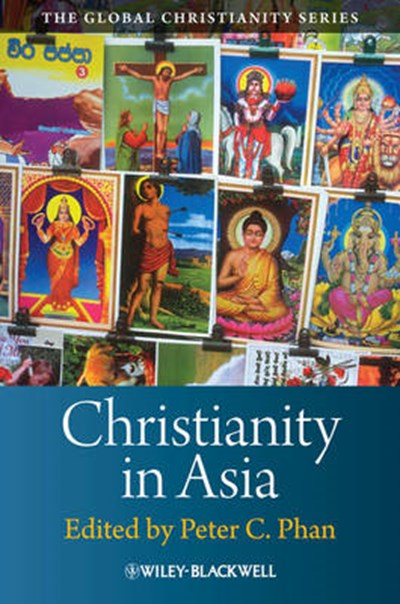 QTY
Add to Basket
Publisher: John Wiley and Sons Ltd
ISBN: 9781405160902
Number of Pages: 290
Published: 26/11/2010
Width: 15.9 cm
Height: 22.8 cm
Description Author Information Reviews
Christianity in Asia explores the history, development, and current state of Christianity across the world s largest and most populous continent. * Offers detailed coverage of the growth of Christianity within South Asia; among the thousands of islands comprising Southeast Asia; and across countries whose Christian origins were historically linked, including Vietnam, Thailand, China, Hong Kong, Taiwan, Japan, and Korea * Brings together a truly international team of contributors, many of whom are natives of the countries they are writing about * Considers the Middle Eastern countries whose Christian roots are deepest, yet have turbulent histories and uncertain futures * Explores the ways in which Christians in Asian countries have received and transformed Christianity into their local or indigenous religion * Shows Christianity to be a vibrant contemporary movement in many Asian countries, despite its comparatively minority status in these regions

Peter C. Phan holds the Ignacio Ellacuria Chair of Catholic Social Thought at Georgetown University. The first non-Anglo person to be elected President of Catholic Theological Society of America, his books include Mission and Catechesis (1999), Christianity with an Asia Face (2003), and Vietnamese-American Catholics (2005).

"These praiseworthy books from Bays and Phan will enhance their readers' understanding of the manifold Christianities of China and Asia as well as of the global history of east-west relations." ( Journal of Ecclesiastical History , 1 January 2013) "A stimulating and wide-ranging collection of often valuable introductions. There are also new insights in a range of settings, for student and scholar alike." (Asia Journal of Theology (vol. 26 no. 1, 2012) "Christianities in Asia is intended to be an accessible book on this subject... But overall, the book fulfils its function as an introduction to the various forms of Christianity in Asia." (Swedish Missiological Themes, 2011) "Leading off an impressive new Blackwell series on global Christianity, Christianities in Asia is a rich collection of essays on various regions by top-ranked names in the field." (The Christian Century, 7 October 2011) "This is a fascinating book, which corrects our Eurocentric under - stand ing of the earliest Church and what happened during the later missionary eras." (Church Times, 1 June 2011) "As an introductory text, this volume sets a standard for the field that will not soon be surpassed. Essential. Lower-lever undergraduates through professional/practitioners." (Choice, 1 May 2011) "Christianities In Asia gives a wonderful sampling of essays written by Asian theologians who present the ide variety of Christianities currently in existence in Asia. Eleven theologians take on the arduous task of presenting the history, the current context, and the practices of Christianity within their own respective countries ... nevertheless, as it stands, this book will prove invaluable for generations to come as it lays out the historical, social and political identity of Asia, which is imperative to understand Asian Christianity and by relation, the Christianity of the West." (Studies in Religion, 1 May 2011) "Scholars of religion, some in the country or region they cover, and some in the West, explore Christianity not as it has been imposed in Asia through Western missions, but as it has been received and transformed into local or contextualized Christianities, with their own ecclesiastical structures, liturgy and prayers, spirituality, theology, art and architecture, music and song, dance, and other elements. Among the countries and groupings are India, Pakistan, Bangladesh, and Burma/Myanmar; Sri Lanka; Malaysia and Singapore; Vietnam, Cambodia, Laos, and Thailand; Taiwan, Hong Kong, and Macao; South Korea; and the Middle East. They survey is intended to be accessible to nonspecialists and general readers." ( Book News Inc., February 2011)