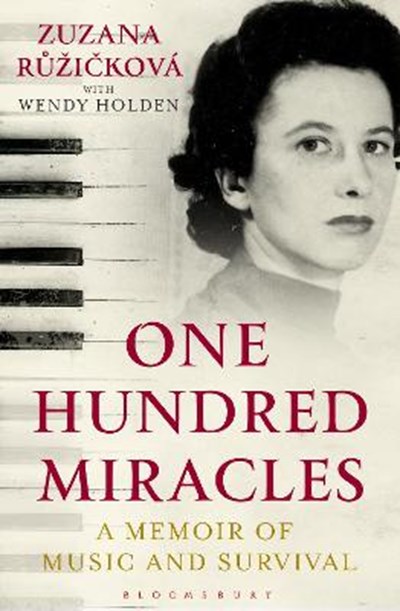 QTY
Add to Basket
Publisher: Bloomsbury Publishing PLC
ISBN: 9781408896839
Number of Pages: 368
Published: 18/04/2019
Width: 15.3 cm
Height: 23.4 cm
Description Author Information Reviews
The remarkable memoir of Zuzana Ruzickova, Holocaust survivor and world-famous harpsichordist. Zuzana Ruzickova grew up in 1930s Czechoslovakia dreaming of two things: Johann Sebastian Bach and the piano. But her peaceful, melodic childhood was torn apart when, in 1939, the Nazis invaded. Uprooted from her home, transported from Auschwitz to Hamburg to Bergen-Belsen, bereaved, starved, and afflicted with crippling injuries to her musician's hands, the teenage Zuzana faced a series of devastating losses. Yet with every truck and train ride, a small slip of paper printed with her favourite piece of Bach's music became her talisman. Armed with this 'proof that beauty still existed', Zuzana's fierce bravery and passion ensured her survival of the greatest human atrocities of all time, and would continue to sustain her through the brutalities of post-war Communist rule. Harnessing her talent and dedication, and fortified by the love of her husband, the Czech composer Viktor Kalabis, Zuzana went on to become one of the twentieth century's most renowned musicians and the first harpsichordist to record the entirety of Bach's keyboard works. Zuzana's story, told here in her own words before her death in 2017, is a profound and powerful testimony of the horrors of the Holocaust, and a testament in itself to the importance of amplifying the voices of its survivors today. It is also a joyful celebration of art and resistance that defined the life of the 'first lady of the harpsichord'- a woman who spent her life being ceaselessly reborn through her music. Like the music of her beloved Bach, Zuzana's life is the story of the tragic transmuted through art into the state of the sublime.

Zuzana Ruzickova was a celebrated Czech harpsichordist and a survivor of three Nazi concentration and slave labour camps. She recorded over one hundred albums, performed across the world to great acclaim, and became an influential teacher at the Prague Academy. Zuzana died in Prague in 2017 aged ninety. Wendy Holden is the author of more than thirty published titles, many of them about the lives of remarkable women. A journalist and former war correspondent, she wrote Born Survivors, about three mothers and their babies who survived the Holocaust. She lives in Suffolk, England.