Peace and Peacemaking in Paul and the Greco-Roman World 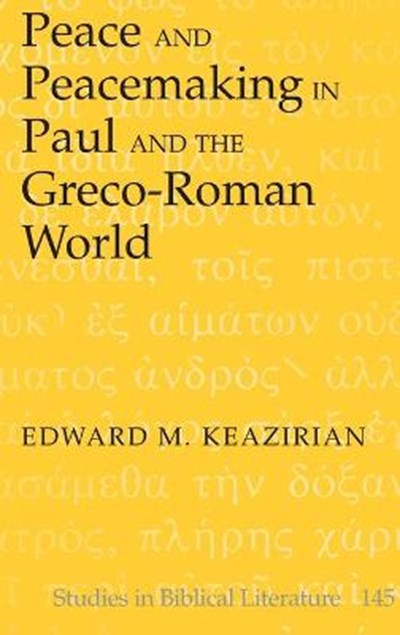 Peace and Peacemaking in Paul and the Greco-Roman World

QTY
Add to Basket
Publisher: Peter Lang Publishing Inc
ISBN: 9781433115660
Number of Pages: 214
Published: 29/10/2013
Width: 15.5 cm
Height: 23 cm
Description Author Information Reviews
Peace and Peacemaking in Paul and the Greco-Roman World compares the Apostle Paul's understanding of peace with various conceptions of peace in the Greco-Roman thought world of the first century. In contrast to similar studies that focus on the question of pacifism in the ancient world, the author seeks to clarify how the Greeks defined peace and then to show how their conception of war and peace established the ethos that ultimately defined them as a people. From their earliest days, the city-states that eventually became Greece were constantly ravaged by war. Their myth, legend, religion, education, philosophy, and science created and perpetuated the idea that conflict was essential for existence. This idea passed to Rome as well so that by the first century, the Greco-Roman world consistently viewed peace as brief periods of tranquility in an existence where war and conflict were the norm. Paul, however, insists that peace must be the norm within the churches. Peace originates in God and is graciously given to those who are justified and reconciled to God through Jesus Christ. God removes the enmity caused by sin and provides the indwelling Spirit to empower believers to think and behave in ways that promote and maintain peace. Three social dynamics (shame-honor, patron-client, and friendship-enmity) are at work in Paul's approach to conflict resolution and peacemaking within the churches. Rather than giving specific procedures for resolving conflict, Paul reinforces the believers' new identity in Christ and the implications of God's grace, love, and peace for their thoughts, words, and behavior toward one another. Paul uses these three social dynamics to encourage believers in the right direction, but their ultimate motivation and empowerment must arise from their common relationship with God in Jesus Christ by the power of the Holy Spirit.

Edward M. Keazirian earned his ThD in New Testament and Christian Origins from Boston University School of Theology. He is currently Assistant Professor of Greek and Director of the Greek Language Program at Gordon-Conwell Theological Seminary (South Hamilton, MA). His scholarly interests include Greek language, ancient rhetoric, epigraphy, and Pauline studies within the context of the first century Greco-Roman world. In addition to his teaching and research, Dr. Keazirian is active in the local church with special attention to the integration of the arts and worship.