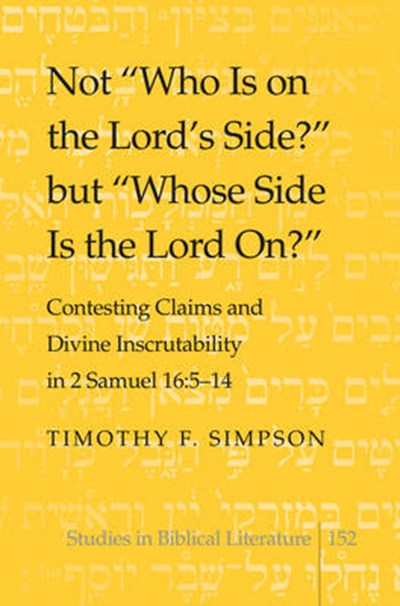 eBook FAQ
Add to Basket
Publisher: Peter Lang Publishing Inc
ISBN: 9781433119798
Number of Pages: 155
Published: 31/03/2014
Width: 15.5 cm
Height: 23 cm
Description Author Information Reviews
Second Samuel 16:5-14 is an important text for defining the character of both King David and Yahweh, the God of Israel. In this scene, the points of view of the various speakers battle for control of the narrative, attempting in turn to align their perspective with some aspect of what has been revealed earlier about Yahweh in the larger biblical story. Shimei, relative of the dead King Saul, paints David as a murderer and under a divine curse. Shimei presents himself as God's instrument of truth and vengeance. Abishai, David's nephew, first paints Shimei as a seditionist worthy of death, and then David as a kind of moral weakling who has lost his previous vigor and resolve. Abishai presents himself as the upholder of God's Torah, the traditional family and the values that David himself used to espouse. David, when it comes his turn to speak, cuts a middle path between Shimei and Abishai, agreeing and disagreeing with both in turn. He then makes a startling theological declaration about his relationship to Yahweh that has often been taken to be a sign of faith, but which can more easily be read as a sign of his own hubris, which in turn fundamentally shapes the way in which the reader comes to think about Yahweh.

Timothy F. Simpson earned his PhD at Florida State University. He is a minister in the Presbyterian Church (USA) and teaches at the University of North Florida.