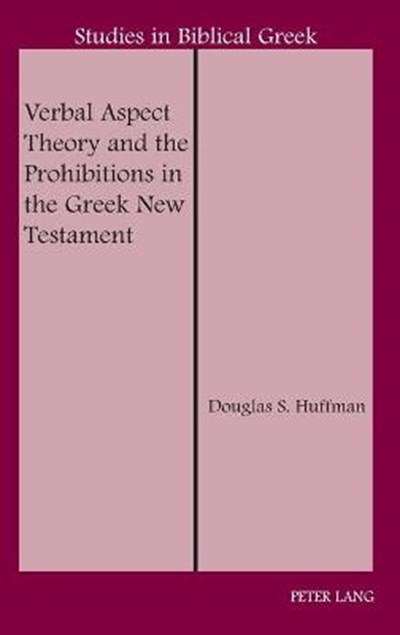 eBook FAQ
Add to Basket
Publisher: Peter Lang Publishing Inc
ISBN: 9781433123580
Number of Pages: 571
Published: 24/06/2014
Width: 15.5 cm
Height: 23 cm
Description Author Information Reviews
The end of the twentieth and the beginning of the twenty-first centuries have involved much discussion on overhauling and refining a scholarly understanding of the verbal system for first-century Greek. These discussions have included advances in verbal aspect theory and other linguistic approaches to describing the grammatical phenomena of ancient languages. This volume seeks to apply some of that learning to the narrow realm of how prohibitions were constructed in the first-century Greek of the New Testament. Part 1 "The Great Prohibition Debate" seeks to demonstrate that verbal aspect theory has a better explanation than traditional Aktionsart theory for authorial choices between the negated present imperative and the negated aorist subjunctive in expressing prohibitions in the Greek New Testament. Part 2 "All the Prohibitions in the Greek NT" continues to examine prohibitions, but is more of an exercise in functional linguistics. That is, rather than apply verbal aspect theory to the grammar of prohibition constructions, Part 2 seeks only to survey the (initially surprising) wide variety of ways prohibitions can be expressed in koine Greek: more than a dozen different constructions. To do this, the NT prohibitions are grouped in their varying grammatical-syntactical and/or pragmatic constructions, all of which function - in varying degrees - in a prohibitory fashion. This taxonomy may prove to be the beginnings of further investigations into how biblical Greek communicates commands.

Douglas S. Huffman (PhD, Trinity Evangelical Divinity School) serves as Professor and Associate Dean of Biblical and Theological Studies at the Talbot School of Theology at Biola University in La Mirada, California, where he teaches courses in New Testament and Greek. His research interests include Luke-Acts, worldview and apologetics, and New Testament Greek. Huffman is author of several scholarly articles in books and journals, co-editor of God Under Fire: Modern Scholarship Reinvents God (2002), contributing editor of How Then Should We Choose? Three Views on God's Will and Decision Making (2009), and contributing editor of Christian Contours: How a Biblical Worldview Shapes the Mind and Heart (2011).