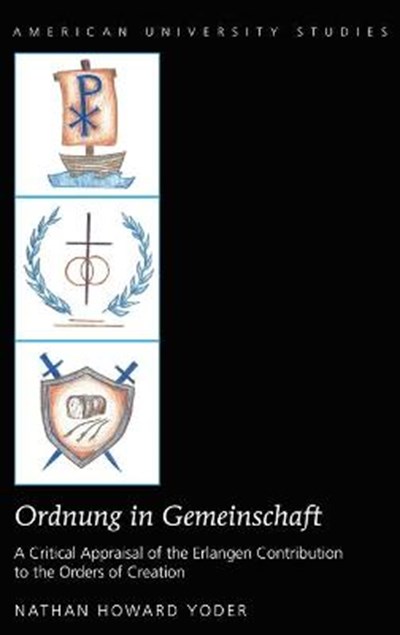 eBook FAQ
Add to Basket
Publisher: Peter Lang Publishing Inc
ISBN: 9781433124303
Number of Pages: 300
Published: 31/08/2016
Width: 15 cm
Height: 22.5 cm
Description Author Information Reviews
The Lutheran doctrine of the orders of creation specifies fundamental forms of human community. Grounded in God's structuring of the universe, these institutions acquire their expression in human history. Although they are fallen and distorted under sin, they remain God's good creation. Illumined by the witness of Scripture, their ontology exists independently of ideological conceit. The tradition is a specifically Lutheran consideration of natural law theory and plays an important role in two-kingdoms theology and the law/gospel dialectic. Historically, the doctrine has suffered significant abuse, specifically with the extra-scriptural elevation of Volk and race as inviolable institutions in support of Nazi ideology. Consequently, many have dismissed the doctrine as a static worldview that disallows critique of the status quo. In its orthodox biblical formulation, however, the doctrine remains a powerful safeguard against what Walter Kunneth calls "the ideological alienation of the gospel" that invokes the name of Christ to justify sinful desire. Nathan Howard Yoder evaluates the variant orders of creation models of the Erlangen theologians of the nineteenth and twentieth centuries. Concentrating specifically on the work of Paul Althaus, Werner Elert, and Walter Kunneth, he lifts up Kunneth's christological/trinitarian focus and appeal to sola scriptura as essential correctives to the tradition. He makes the case that the doctrine remains imperative to moral theology, specifically in the Church's efforts against the rampant antinomianism of the postmodern era. This book will serve well as a reference for graduate and post-graduate level courses in systematic theology, Christian ethics/moral theology, and the Lutheran Confessions.

Nathan Howard Yoder, STS, completed his doctoral work in theology at the University of Regensburg, Germany. He currently serves as the pastor of St. Martin's Lutheran Church in Maiden, North Carolina, and Dean of the Carolinas Mission District of the North American Lutheran Church. He is adjunct faculty for the North American Lutheran Seminary, Gordon-Conwell Theological Seminary in Charlotte, North Carolina, and the Trinity School for Ministry in Ambridge, Pennsylvania. He is also a member of the NALC's Commission on Theology and Doctrine and the Society of the Holy Trinity. Some of his recent publications include "Breaking the Promise of Lutheran Unity: Apostasy, Heresy, and Schism," in On Being the Church in These Precarious Times, edited by Carl E. Braaten, and "Pygmalion Redeemed: The Christ-Centered Imperative of Marriage," in The Lake Louise Commission: The Sacred Family.