Some Social and Religious Perspectives on the Nigerian Crisis 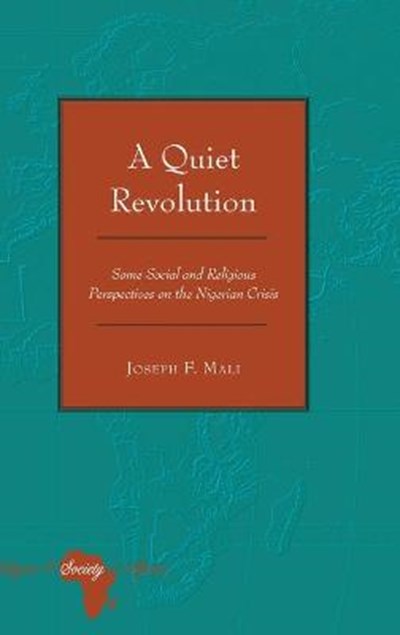 Some Social and Religious Perspectives on the Nigerian Crisis

eBook FAQ
Add to Basket
Publisher: Peter Lang Publishing Inc
ISBN: 9781433125010
Number of Pages: 138
Published: 28/04/2014
Width: 15.5 cm
Height: 23 cm
Description Author Information Reviews
In A Quiet Revolution: Some Social and Religious Perspectives on the Nigerian Crisis, Joseph F. Mali argues that contrary to popular belief, corruption and failed leadership are not at the heart of the Nigerian crisis. Corruption and misrule, though they have done a terrible harm to the Nigerian society, are in fact byproducts of something much more sinister in the same way that smoke is the byproduct of fire. The real trouble with Nigeria, Mali puts it bluntly, is a lifestyle of profound selfishness, which the people and their leaders have in common. The nation is still bleeding because of this evil. Unless Nigerians cure this "disease", Mali maintains, no system of government is likely to succeed in Nigeria. In vain do Nigerians seek political solutions as long as selfishness remains their credo! Since Nigeria's problem is moral in nature, Mali insists, the remedy must also be ethical in character. Accordingly, he proposes "A Quiet Revolution" as a cure for Nigeria's ailment. This revolution is not a silent coup to overthrow the Nigerian government. It is not "a French-styled rebellion in which the masses on the streets, and peasants in the country put an end to centuries of absolute monarchy". Rather, the "Quiet Revolution" is an interior change; an individual transformation. As long as this change has not taken place, Mali declares, it will be difficult to repair and restore Nigeria.

Joseph F. Mali, a Nigerian Catholic priest, is the Director of Pastoral Care and Mission Effectiveness at Saint Francis Hospital in Poughkeepsie, New York. He is also the Catholic Chaplain of Bard College in Annandale-on-Hudson, New York. Mali has a diploma in religious studies from the University of Ibadan in Nigeria, a Bachelor of Divinity in theology from the Pontifical Urban University in Rome, a Master of Arts in biblical studies from Saint John's University in Jamaica, New York, and a Doctorate of Philosophy in theology, with specialization in the New Testament, from Fordham University in Bronx, New York. He is the author of The Christian Gospel and Its Jewish Roots: A Redaction-Critical Study of Mark 2:21-22 in Context (2009) and A Time to Break Silence: To the Catholic Bishops of Northern Nigeria (2012).