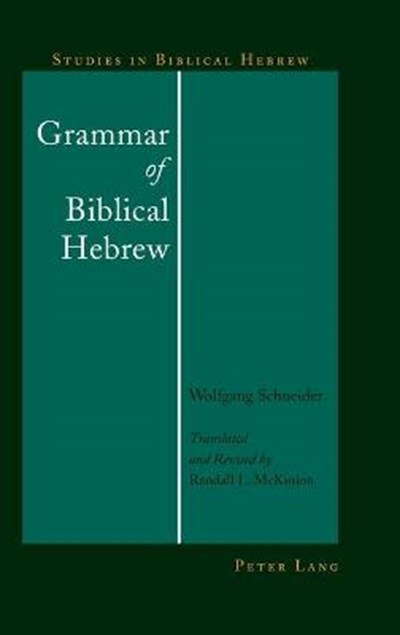 eBook FAQ
Add to Basket
Publisher: Peter Lang Publishing Inc
ISBN: 9781433125287
Number of Pages: 276
Published: 28/12/2015
Width: 15 cm
Height: 22.5 cm
Description Author Information Reviews
Although Wolfgang Schneider's Grammatik des biblischen Hebraisch: Ein Lehrbuch serves primarily as an introductory textbook to biblical Hebrew, it makes an invaluable contribution to the text-linguistic study of Hebrew Bible. Schneider's understanding of narrative syntax and discourse linguistics continues to influence such grammarians as Niccacci and Talstra, through whom his work is validated. His discussion of clauses and text syntax remains pertinent to Hebrew students and professors alike. With this English translation, Schneider's work may now make a worldwide contribution to biblical studies by clarifying for the student the contribution of text grammar to the reading of the biblical text.

Wolfgang Schneider (1933-2009) served as lecturer in linguistics and Hebrew at the Kirchliche Hochschule Wuppertal from 1970 until he retired in 1995. He became a member of the Societas Hebraica Amstelodamensis in 1991 and was given an honorary Doctor of Theology by the Kirchliche Hochschule Wuppertal in 2001. His other works include Debarim: Ein UEbungsbuch fur den Hebraisch-Unterricht. Randall L. McKinion has served as Associate Professor of Old Testament at Cedarville University in Cedarville, Ohio, since 2014. Previously he served for 11 years as Associate Professor of Old Testament and Biblical Languages and Vice President of Academic Affairs at Shepherds Theological Seminary in Cary, North Carolina. He received his PhD in Biblical studies from Southeastern Baptist Theological Seminary in Wake Forest, North Carolina.