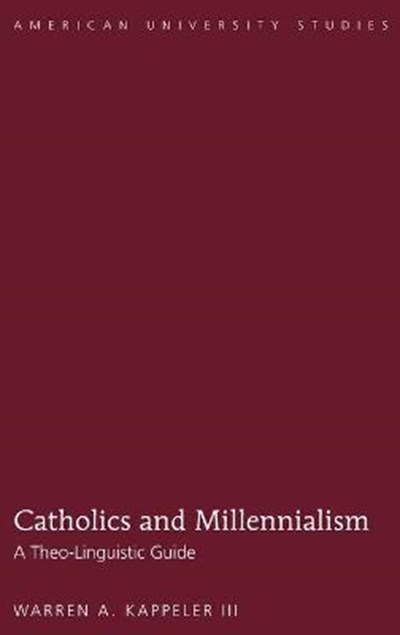 eBook FAQ
Add to Basket
Publisher: Peter Lang Publishing Inc
ISBN: 9781433129643
Number of Pages: 10
Published: 25/11/2016
Width: 15 cm
Height: 22.5 cm
Description Author Information Reviews
Philosophers of religion such as Mark Kingwell regard millenarian dreams as humanity's most powerful hopes for transformation, transcendence, apocalypse, and utopia. In Catholics and Millennialism: A Theo-Linguistic Guide, Warren A. Kappeler III explores the insights of critical discourse theory to examine the impact of millenarian groups upon Catholics. He examines theo-linguistic practices among present-day Catholics through allegorical interpretation, fundamentalism, and neo-literalism. Utilizing surveys of pre-millennial movements as revealed in academic research by Michael Cuneo, William Dinges, and Sandra Zimdars-Swartz, as well as post-millennial collaboration by progressive Catholics such as Hans Kung, Matthew Fox, and Karen Armstrong; Kappeler argues that apocalyptic stories and media images in today's popular culture promote a self-dramatization that encourages sympathetic Catholics to interpret their life experience within the grammar of the millennium myth. While some commentators argue that the new age audience is driven by populist reasoning inside church history and culture, a critical discourse analysis perspective reveals that millenarian movements have provided a language resource for a great number of social, cultural, and political conflicts in the history of Western civilization. Consequently, the mainstream history of the Catholic Church has been dedicated to the a-millennial viewpoint of Saint Augustine of Hippo. Considering these platforms, Kappeler sketches a mediating position between the church's millennial factions called Proleptic Adventism based upon a dialectical approach to both eschatology and incarnational spirituality. Ultimately Kappeler's findings offer hope to a postmodern world by looking to the future instead of the past, by analyzing popular culture in its dynamism and its contradictions, stressing the spiritual elements of liberation and participation, and by expressing itself in sacramental action and analogical reasoning.

Warren A. Kappeler III received his Ph.D. in philosophy of religion from McGill University; his M.A. in theological studies from the University of Dayton; and his B.A. in communication from Bowling Green State University. His previous accomplishments include serving as the editor-in-chief of the academic periodical ARC: The Journal of the Faculty of Religious Studies, McGill University for several years, and serving as a research assistant for the International Marian Research Institute and the Marian Library in Dayton, Ohio. Kappeler has taught courses in humanities, philosophy, and religion at several colleges and universities, including McGill, Ohio Dominican, Shawnee State, Strayer, Wright State, and Sinclair Community College. He is also the author of Communication Habits for the Pilgrim Church: Vatican Teaching on Media and Society (Lang, 2009).