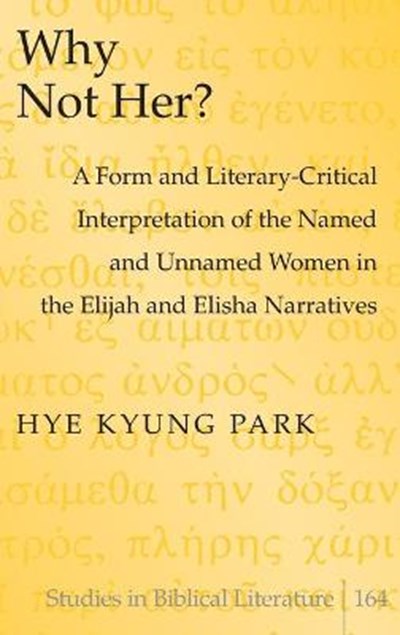 eBook FAQ
Add to Basket
Publisher: Peter Lang Publishing Inc
ISBN: 9781433130175
Number of Pages: 291
Published: 31/08/2015
Width: 15 cm
Height: 23 cm
Description Author Information Reviews
In this book, Hye Kyung Park examines the functions and roles of the women who appear in the Elijah and Elisha narratives. The named and unnamed female characters in the Elijah and Elisha cycles frequently drive the plot of these narratives, giving a voice to important theological, historical, and social concerns that are otherwise overlooked. Consequently, this book elaborates upon the critical meaning of women's voices through a close interpretation of the roles and functions attributed to women in 1 Kings 17:8-24; 2 Kings 4:8-37, 5, and 8:1-6. These female figures and presences include the Zarephath woman in 1 Kings 17:8-24, twenty-nine third-person feminine verbs to emphasize the Shunammite woman's frequent appearances in 2 Kings 4:8-37, the Israelite girl as a prophetess in 2 Kings 5, and the Shunammite woman's return in 2 Kings 8:1-6. Even though the various women in 1 Kings and 2 Kings have not been named throughout the biblical traditions, their presence and actions were crucial for advancing the prophetic narratives concerning Elijah and Elisha. Indeed, the women are crucial to the Elijah and Elisha narratives, both in terms of advancing the plot of the narratives and defining the roles of the prophets presented within.

Hye Kyung Park received her PhD in religion from Claremont Graduate University in California. She is Assistant Professor in the Department of Theology at Chang Jung Christian University in Taiwan. Some of her previous publications include: "Violence and Resistance: A Hermeneutical Dialogue between 'A Shoot' in Isaiah 11 and 'The Sun-moon' in Asian Narratives for Justice", "The Tekoite Wise Woman and Her Prophecy: A Reading of 2 Samuel 14:2 - 20 for Korean Feminist Reunification Theology", and "The Confluence of the Israelite Girl in 2 Kings 5 and Baridegi in a Korean Myth: Toward Hanpuri Hermeneutics for Korean Women" in Madang; "Jamehn Paljang-ee Yoesung Jeehea-wa Ahn Byung Moon-we Sunchungdaek-ee Daehan Haesukhakjek Daehwa (The Hermeneutical Interpretation of the Wise Lady in Proverbs 8 and Sunchundaek by Ahn Byung Moo)", in Shin Hak Sah Sang; and "Sharing Food and Confirming Faith: A Shift in the Meaning of the Eucharist from the Traditional Protestant Perspective to the Modern" in The Foreign Language Journal of Korean Association of Christian Studies.