Paul and the Apocalyptic Triumph

An Investigation of the Usage of Jewish and Greco-Roman Imagery in 1 Thess. 4:13-18 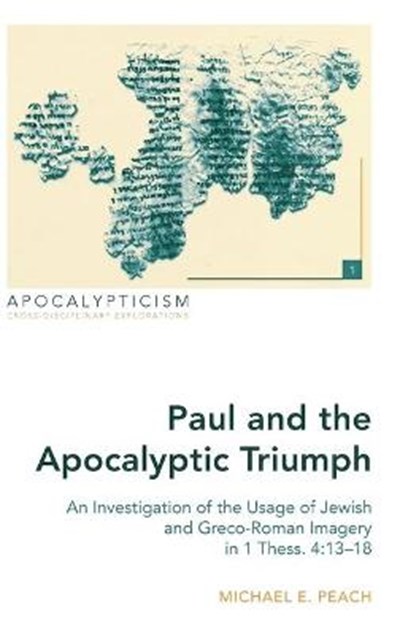 Paul and the Apocalyptic Triumph

An Investigation of the Usage of Jewish and Greco-Roman Imagery in 1 Thess. 4:13-18

eBook FAQ
Add to Basket
Publisher: Peter Lang Publishing Inc
ISBN: 9781433130632
Number of Pages: 198
Published: 29/11/2015
Width: 15.5 cm
Height: 23 cm
Description Author Information Reviews
1 Thessalonians 4:13-18 has long been the quintessential Pauline text on the parousia of Christ. Nowhere else does Paul reveal a more vivid picture of Christ's coming. The apostle Paul employs a number of images to describe the parousia to the Thessalonian congregation who have become anxious, grief-stricken, and despairing in the midst of the loss of their loved ones. Until recently scholars have held that Paul's use of imagery in 1 Thess. 4:13-18 was either inspired by Greco-Roman imperial categories or Jewish apocalyptic categories. Michael E. Peach provides a fresh examination of imagery in 1 Thess. 4:13-18 arguing that Paul synthesizes both the Jewish and Greco-Roman imagery. With careful analysis, Peach traces the history of interpretation of Pauline eschatology finding patterns of thought concerning the source of inspiration of Paul's use of imagery. Utilizing these patterns, the author further examines the meaning and function of four images employed by Paul: "a loud command," "the sound of an archangel," "the trumpet of God," and "the meeting of the Lord." Ultimately, Peach's discoveries demonstrate that Paul synthesizes apocalyptic and Greco-Roman triumph imagery to create a dramatic mosaic of the apocalyptic triumph, the parousia of Jesus Christ.