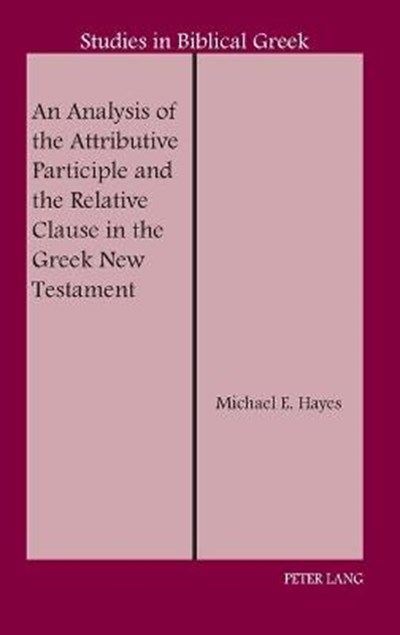 eBook FAQ
Add to Basket
Publisher: Peter Lang Publishing Inc
ISBN: 9781433135071
Number of Pages: 382
Published: 30/03/2018
Width: 15 cm
Height: 22.5 cm
Description Author Information Reviews
Many New Testament Greek grammarians assert that the Greek attributive participle and the Greek relative clause are "equivalent." Michael E. Hayes disproves those assertions in An Analysis of the Attributive Participle and the Relative Clause in the Greek New Testament, thoroughly presenting the linguistic categories of restrictivity and nonrestrictivity and analyzing the restrictive/nonrestrictive nature of every attributive participle and relative clause. By employing the Accessibility Hierarchy, he focuses the central and critical analysis to the subject relative clause and the attributive participle. His analysis leads to the conclusion that with respect to the restrictive/nonrestrictive distinction these two constructions could in no way be described as "equivalent." The attributive participle is primarily utilized to restrict its antecedent except under certain prescribed circumstances, and when both constructions are grammatically and stylistically feasible, the relative clause is predominantly utilized to relate nonrestrictively to its antecedent. As a result, Hayes issues a call to clarity and correction for grammarians, exegetes, modern editors, and translators of the Greek New Testament.

Michael E. Hayes is an ordained pastor in the Lutheran church. He serves as Minister to Adults at historic St. John's Lutheran Church in Old Towne Orange, California, where he preaches, teaches, leads discipleship ministries, and produces video curricula for small groups. He earned the doctor of philosophy degree in exegetical theology from Concordia Seminary, St. Louis.