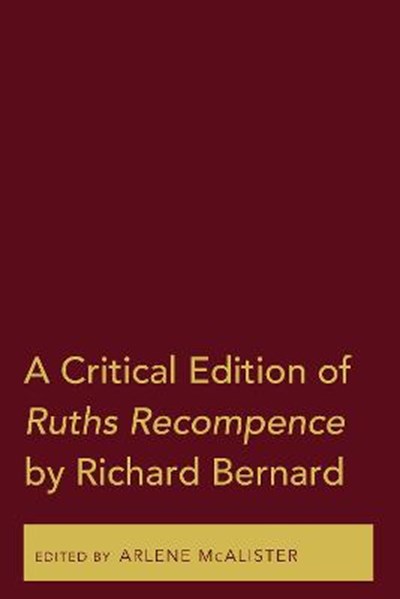 eBook FAQ
Add to Basket
Publisher: Peter Lang Publishing Inc
ISBN: 9781433149054
Number of Pages: 472
Published: 08/05/2019
Width: 15 cm
Height: 22.5 cm
Description Author Information Reviews
A Critical Edition of Ruths Recompence by Richard Bernard presents Richard Bernard's commentary on the book of Ruth, originally published in 1628, to the modern reader. Arlene McAlister's introduction sets the work in its contemporary context and most significantly elucidates the issue of women's conduct that arises from the biblical story and challenges Bernard and the preceding early modern Ruth commentators. The introduction details how the commentators have great difficulty in expounding Ruth's approach to her kinsman Boaz on the threshing floor alone at night and request to him to marry her according to the levirate law. They find that this conduct is contrary to the voluminous women's conduct literature of their own society. The introduction also addresses such issues as Bernard's anti-Catholicism and surveys the interpretation of the book of Ruth prior to and in the early modern period. Ruths Recompence is further set in context by the annotations in this book. The annotations also illustrate how Bernard differs from or develops the discussions of preceding commentators.

Arlene McAlister holds a PhD in English literature from the University of Edinburgh (2012). She is currently an independent researcher based in Edinburgh. Her latest publication is an article in the journal The Seventeenth Century on Ruths Recompence.