From Proverbs to Parables

The Creative Wisdom of Jesus 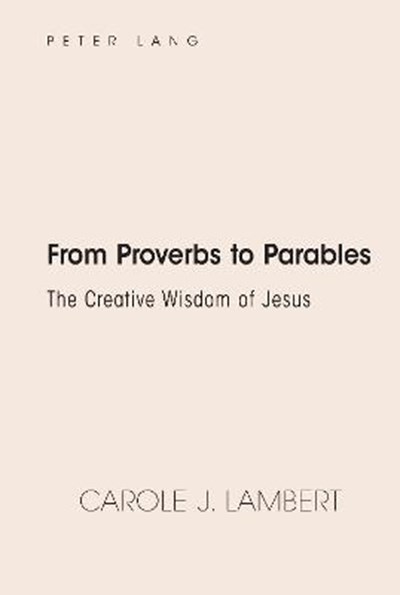 From Proverbs to Parables

The Creative Wisdom of Jesus

QTY
Add to Basket
Publisher: Peter Lang Publishing Inc
ISBN: 9781433162893
Number of Pages: 164
Published: 28/01/2021
Width: 15 cm
Height: 22.5 cm
Description Author Information Reviews
The goal of this book is to suggest that Jesus as a creative artist was heavily influenced by the Hebrew Bible's Book of Proverbs. It posits that he created some of his short parables from specific verses found in Proverbs, suggests that he expanded some basic sapient themes present in this book when composing his parables, and shows him reacting negatively to the commonly held belief that this Book's overall concept of wisdom is that the wise are rewarded and the fools are punished by God through their own self-destructive choices and subsequent actions. Thus this text points to Jesus as an inventive artist, a concept not usually associated with him, and it complicates simplistic ways of defining biblical wisdom. Part I demonstrates how Jesus might have created his tales from specific proverbs found in the Book of Proverbs. The overarching theme for these parables is wisdom: Jesus as wisdom (I Cor. 1:24) speaking wisdom in new ways. Part II discusses Jesus as a self-actualized artist who creatively designed these tales. It examines what shaped Jesus' artistry, what might have been the sources of his literacy, why he might have chosen to expand individual proverbs imaginatively in order to create his moral tales, and how his wisdom enhanced conventional attitudes toward wisdom as the former included and clarified his new "kingdom of God" concepts. This book could be used in courses treating Literature and the Bible, Biblical Art, The Humanity of Jesus, and Wisdom Literature Common to Christians and Jews.

Carole J. Lambert is Professor of English at Azusa Pacific University in California. In addition to four National Endowment for the Humanities grants, she was awarded a Fulbright Fellowship to conduct research in Brussels, Belgium. Among other books and articles, she is the author of Is God Man's Friend? Theodicy and Friendship in Elie Wiesel's Novels, Ethics after Auschwitz? Primo Levi's and Elie Wiesel's Response, and Against Indifference: Four Christian Responses to Jewish Suffering during the Holocaust (C. S. Lewis, Thomas Merton, Dietrich Bonhoeffer, Andre and Magda Trocme). She earned her Ph.D. in comparative literature from the University of California, Berkeley.