Subordination and Freedom in 1 Peter 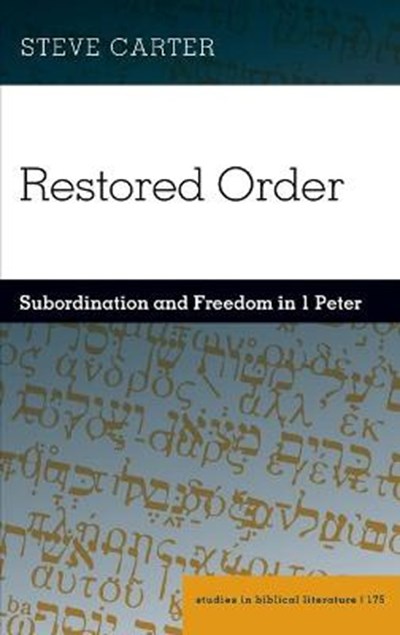 Subordination and Freedom in 1 Peter

QTY
Add to Basket
Publisher: Peter Lang Publishing Inc
ISBN: 9781433190438
Number of Pages: 318
Published: 24/11/2021
Width: 15 cm
Height: 22.5 cm
Description Author Information Reviews
The concept of subordination plays a prominent role in the paranesis of 1 Peter, and it appears too in the context of Christ's victory over the cosmic powers. It seems to presuppose some kind of given natural and social order in which people must live in their allotted place. But the author also sees his readers' subordination as conditioned by their status as free people, which he expounds in several passages. This investigation aims to clarify the meaning and relationship of the concepts of subordination and freedom in 1 Peter, with reference to the related idea of order. After an introduction that sets out the issues in detail, the first main section examines the three themes in the wider thought of the first century CE, and the second provides detailed exegesis of the key Petrine texts. A final chapter synthesizes this evidence and draws conclusions regarding the conceptuality of subordination and freedom expressed in the letter. The study presents the idea of "restored order" as a new interpretive key to the teaching and paranesis of 1 Peter and the significant New Testament tradition to which it belongs. It clarifies the important Petrine concepts of subordination and freedom, with that of order, within the letter as a whole and its constituent parts, and it illuminates the exegesis of various disputed texts and passages. Scholars and research students of 1 Peter and the wider New Testament will find here a compelling proposal to stimulate and inform their own engagement with the text.

Steve Carter received his PhD from the University of Aberdeen in 2018, having undertaken his research at Bristol Baptist College. He has worked for twenty years as an editor, writer and manager for various publishers and charities.