Case for the Divinity of Jesus 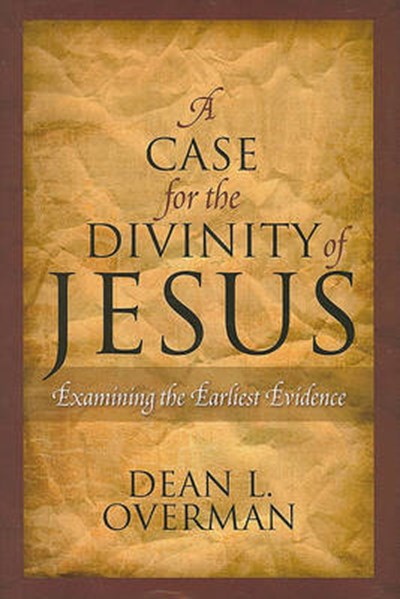 Case for the Divinity of Jesus

eBook FAQ
Add to Basket
Publisher: Rowman & Littlefield
ISBN: 9781442203228
Number of Pages: 320
Published: 15/01/2010
Width: 16.5 cm
Height: 24.1 cm
Description Author Information Reviews
Whether Jesus was really the Son of God or not is a central question for Christians-and one that has provoked heated debate since the time of Jesus' birth. Dean L. Overman examines the earliest Christian records to build a compelling case for the divinity of Jesus. Addressing questions raised by books such as Bart Ehrman's Misquoting Jesus and Elaine Pagels' The Gnostic Gospels, Overman builds a carefully reasoned case for Jesus truly being the Son of God.

Dean L. Overman is former senior partner of the international law firm Winston & Strawn. A former Templeton scholar at Oxford University in religion, information theory, and physics, he has also studied theology at Princeton Theological Seminary and Harvard University. He lives in Washington, D.C., and is the author of A Case for the Existence of God, and A Case Against Accident and Self-Organization.

I admire this book's elegant, efficient, and clear style, formulated by a trained jurist. The argumentation is lucid and strong throughout, giving readers important and solid knowledge in 'good measure, pressed down, shaken together, running over.' It is a clearly written presentation against the proposition that early Christians freely constructed the words and traditions of Jesus. The reader is in good hands. -- Birger Gerhardsson, Lund University, author of The Reliability of the Gospel Tradition Skillful lawyer Dean L. Overman has carefully marshalled the earliest evidence available from the early church's earliest confessions and set out a compelling case for the divinity of Jesus. What results is not just an enjoyable 'good read'-it is an excellent and perceptive 'must read' for laypeople and scholars alike, which calls for an intelligent response in the court of public opinion. -- Richard N. Longenecker, professor emeritus of New Testament, University of Toronto, author of The Christology of Early Jewish Christianity Dean Overman covers a lot of very important ground in this well organized and easy-to-read book. He makes a solid case for the divinity of Jesus, as seen especially in the historically credible accounts of the resurrection. But Overman deals with many other important topics, such as the reliability of the New Testament Gospels and the unreliability of the second-century gnostic Gospels and the complicated question of how other religions of the world fit into the picture. Students, clergy, experts and non-experts alike will benefit greatly from this book. -- Craig A. Evans, Payzant Distinguished professor of New Testament, Acadia Divinity College; author of Fabricating Jesus Dean Overman brings the investigative skill of a brilliant lawyer together with the insights of an outstanding Christian intellectual leader to make a compelling case for the divinity of Jesus and his resurrection. The careful argument he makes needs to be taken seriously by all who want to examine the foundations for the astonishing claim that Jesus uniquely is the Son of God. No assertion of truth is more revolutionary in the world's history than this. Overman presents an accessible, persuasive case for why this assertion is historically grounded and intellectually trustworthy. -- Wes Granberg-Michaelson, General Secretary Emeritus, Reformed Church in America Dean Overman has produced a carefully written, helpful book that investigates this exceptionally important issue in a persuasive and convincing manner. -- Rev. John Polkinghorne, Cambridge University, author of Belief in God in an Age of Science, Templeton Prize recipient The divinity of Jesus Christ has been a matter of fervent dispute since the Galilean made his appearance on the human stage. Following his death and resurrection, numerous schools of thought arose to try to explain who this man was and why he mattered. Overman, former Templeton scholar at Oxford University who studied religion at Princeton and Harvard, brings his considerable talents to this question, focusing on the scholarly evidence for early belief in the divinity of Jesus. This is the third in a series of studies from his able pen, including a volume examining the case for the existence of God. He spares no effort in dissecting and analyzing early liturgical practices and documentary bases. His examination of Gnosticism and its impact on Christian belief is nothing short of masterful; his reflections about a resurrected messiah among the Jews are thoughtful and pointed... He maintains a level of readability such that any student of Christianity and its leader will benefit from Overman's thorough examination. Publishers Weekly, Religion in Review Online, November 2009 This book is one of the best examples of a solid argument for Jesus' divinity and His relationship with God the Father... He carefully traces the evidence from an enormous collection of sources to prove his book's argument beyond any doubt... Overman writes and discusses as a skillful lawyer would argue his case in a crowded courtroom. Edmonton's Living Light News, January/February 2010 After describing the evidence concerning Jesus of Nazareth, Overman, a former senior partner in the international law firm of Winston & Strawn, develops his case for the divinity of Jesus with reference to the worship patterns in the earliest church, Jesus' use of "I am" sayings and his conviction for blasphemy, the reliability of the canonical Gospel accounts, the reliability of oral Gospel tradition, the resurrection as a plausible event, and the basis of the new and old gnosticism in fantasies. Then he argues that one cannot logically maintain that all religions describe a path to the same ultimate reality, and considers how one should engage a person of another faith concerning diverse religious beliefs. New Testament Abstracts