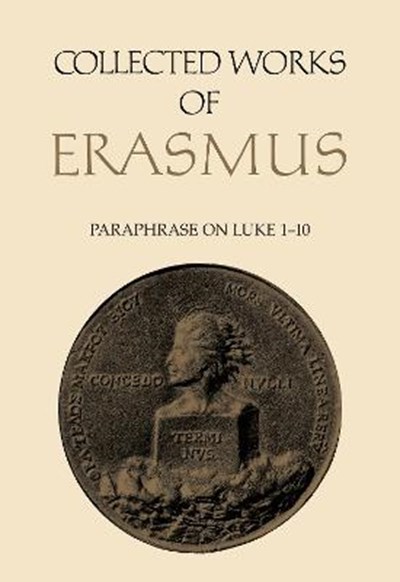 eBook FAQ
Add to Basket
Publisher: University of Toronto Press
ISBN: 9781442648852
Number of Pages: 336
Published: 10/03/2016
Width: 18 cm
Height: 25.4 cm
Description Author Information Reviews
Erasmus yearned to make the New Testament an effective instrument of reform in society, church, and everyday life, and to this end he composed the Paraphrases, in which the words of Holy Scripture provide the core of a text that was vastly expanded to embrace the reforming "philosophy of Christ." Paraphrase on Luke 1-10 contains the first half of Erasmus's Paraphrase on Luke - the second half of which appeared in this series in 2003 - and completes the set of translations of the Paraphrases into English. In his Paraphrase on Luke, Erasmus expands on the original Gospel of Luke in the voice of its original author. The narrative is supplemented by Erasmus' explications of the text's moral, theological, and allegorical meanings and its psychological, historical, and geographical context. In addition to a fluid and idiomatic translation, Paraphrase on Luke 1-10 includes extensive annotations for the general or scholarly reader, making this a valuable and accessible resource for the study of both Erasmus and the New Testament. Volume 47 of the Collected Works of Erasmus series.

Desiderius Erasmus (c. 1466-1536), a Dutch humanist, Catholic priest, and scholar, was one of the most influential Renaissance figures. A professor of divinity and Greek, Erasmus wrote, taught, and travelled, meeting with Europe's foremost scholars. A prolific author, Erasmus wrote on both ecclesiastic and general human interest subjects. Jane E. Phillips is a retired professor of classics at the University of Kentucky and the translator of the Paraphrase on John and Paraphrase on Luke 11-24 in the Collected Works of Erasmus.