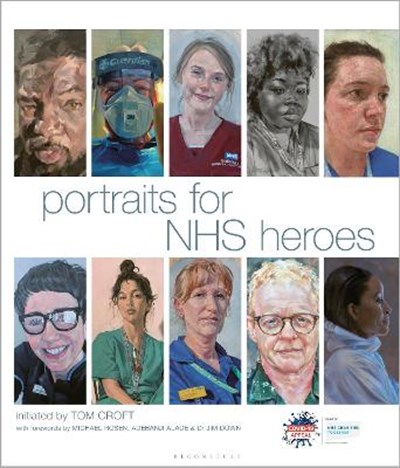 QTY
Add to Basket
Publisher: Bloomsbury Publishing PLC
ISBN: 9781448218004
Number of Pages: 224
Published: 12/11/2020
Width: 24 cm
Height: 28 cm
Description Author Information Reviews
All royalties, a minimum of GBP2.50 from the sale of each book, will be paid to NHS Charities Together (registered charity no. 1186569) to fund vital projects. When the UK went into lockdown in March 2020 to contain the spread of the Covid-19 virus, artist Tom Croft offered to paint an NHS key worker's portrait for free. Unsure how to help and offer his support, he wanted to capture and record the bravery and heroism of frontline workers who were risking their physical and mental health for our wellbeing. Tom suggested that other artists might want to do the same. He made his offer via video message on Instagram and was immediately contacted by Harriet Durkin, a nurse at the Manchester Royal Infirmary, who had contracted Covid-19 and, now recovered, was about to return to the frontline. Tom's portrait of Harriet, wearing PPE, was the first in what became a global art project. The response to the initiative was staggering and Tom personally paired up 500 artists and NHS workers in the first two weeks. When numbers reached the thousands, Tom set up a traffic light system so that artists and frontline workers could match themselves. Portraits in all mediums followed, from oils to pencil, sculpture to ceramic, mosaic to mural. This book presents a selection of these remarkable images. Some are by leading artists such as Alastair Adams and Mary Jane Ansell, and they are showcased here as both a celebration and a remembrance, in physical form, of the dedication of our NHS key workers. 'I just couldn't imagine what it must be like to have to put on your PPE and head into the frontline of the pandemic, so I wanted to try and thank NHS workers in some small way. We are indebted to them, so to be able to commemorate, celebrate and record their experiences through portraiture felt fitting. This collection will stand as a permanent record of their bravery in a time of national crisis.' Tom Croft

Tom Croft is a portrait painter, working in oils from his studio in Oxford. He has produced paintings for a wide range of clients, from Manchester United Football Club to Oxford colleges and private commissions. Notable portraits include the first female bishop Libby Lane, author Mark Haddon, former home secretary Jacqui Smith, BBC arts editor Will Gompertz, footballers Wayne Rooney and David Beckham. Tom appeared on Sky Arts Portrait Artist of the Year. He opens his studio to the public during Oxfordshire Artweeks each year and is a member of the Oxford Art Society; he is also a member of the Contemporary British Portrait Painters collective, CBPP, a group of some of the best portrait artists working in Britain today.