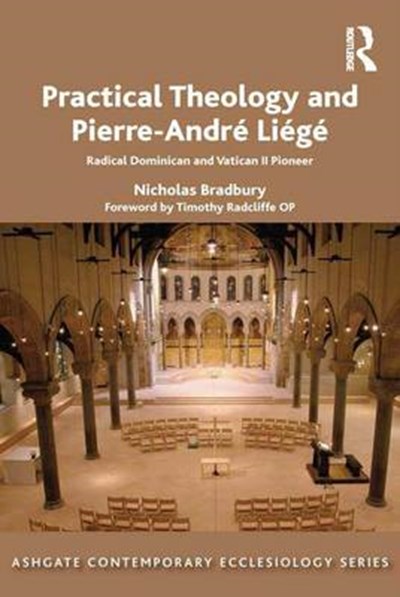 eBook FAQ
Add to Basket
Publisher: Taylor & Francis Ltd
ISBN: 9781472418708
Number of Pages: 266
Published: 28/07/2015
Description Author Information Reviews
Pierre-Andre Liege, one of the foremost French theologians of the 20th century, influenced John XXIII and Paul VI, and sat on Vatican II committees with both the future John Paul II and Benedict VI. Fifty years on from Vatican II is a good time to remember the decade of dramatic struggle and pioneering work that preceded it, and review what it accomplished. This book explores the life and work of Pierre-Andre Liege, presenting it to an English speaking readership for the first time. Discussing the impact and profound challenges Liege's work raises for spirituality and church life today, Bradbury tackles issues including: the organisation of parish life rooted in theological criteria; cradle to grave corporate Christian formation; a compelling vision of what the church is for and why, and how should this be expressed in practice. Bradbury argues that for faith to match real life, the church today needs to let go of much baggage, align its talk to its action, and radically re-examine the question of what the church needs to do to conform to the Gospel. This book takes critical issues confronting practical theology and the church, breaking them open in a lively and accessible style.

Nicholas Bradbury was ordained in 1973 to a curacy at the Elephant and Castle. From 1976-79 he was in community with the Jesuits in New York City. After serving as Vicar of Holy Trinity, Tottenham he became Director of Pastoral Theology at Salisbury & Wells Theological College during which time, following the Faith in the City Report, he wrote City of God? Pastoral Care in the Inner City (1989), considerably acclaimed by reviewers. He has written for journals such as Theology, Contact: the interdisciplinary journal of pastoral studies, the Scottish Journal of Theology and the HSJ (Health Service Journal) as well as for the Guardian on Anandamayi Ma and the Hindu spiritual tradition and for other newspapers on a wide variety of subjects. He has made over 130 BBC broadcasts on Radio 2 and 4. He is widely known as a facilitator, retreat-giver and NHS executive team coach. From 2001-2013 he was a Senior Fellow of the King's Fund and from 2013-17 he was Head of System Leadership at the NHS Leadership Academy as well as Director of development for Nurses and Midwives. He is founder-director of Humanum - to develop the human (www.humanum.co.uk) and on the team at St Michael's, Summertown in Oxford. Humanum runs Caillier Retreats in Charente, France.